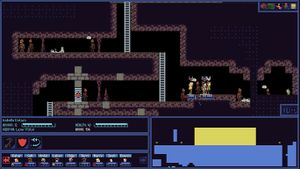 The crew are clustered around the relevant Suna.

When you land, two opposing forces will move into position in front of your ship and start fighting each other. You can wait for them to finish killing each other, or you can intervene and hope for a Rocket Launcher or Mech Suit to drop. When that fighting is over, go left and talk about the Comm Array to the second talkative Suna you see. He will tell you where the key to get to it is and give you the coordinates for the Caves drop point. If you go right and fight the rest of the Kursha, watch your health carefully. Generally one crewman will take the brunt of the attack while the rest do not get hit. Collect the War Relics and Valuable Scrap, then go to the Caves. 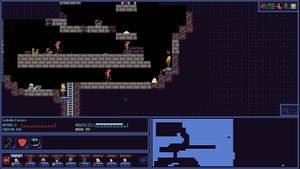 The Kursha might not be stuck in the platform.

The first Kursha has no gun. Try to kill him while the second Kursha is off screen to the left, then kill that Kursha. One more Kursha will be at the foot of the ladder. Another will shoot at you when you reach the top of the ladder. You can hide in the one block hole next to the top. The platform above him has two more guards. One appears to have a Stun Prod and is stuck in the platform, causing him to be the primary target for guard commands. Two Bats and one Kursha guard the stairs. Do not worry if you cannot kill the second Bat. The last two Kursha can be killed by having your Assault Rifle bearer shoot from the right side of their platforms. Heal your crew, reload, and set them in battle formation. Talk to the Mech Suit-wearing Kursha at the top of the cave. She will drop the Ott Chip immediately, so you can run, but a Goo Gun will make this fight a piece of cake. Return to your ship and harvest the assorted resources. Go back to the Trenches.

If you were quick, the drop point will be as you left it. Otherwise, you will have to repeat the previous instructions. When the way is clear, head for the locked door and right click the Comm Array. You will get a reply, a new drop point, and an Important Recording. 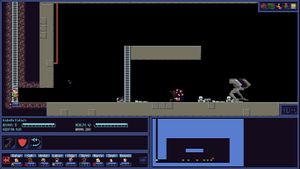 The center platform can be ignored.

There are two enemies here: one Abductor and one Big Mech. The Big Mech has approximately 200 hit points. You should be able to kill the Abductor from the bottom of the shaft. The Big Mech can also get in this space, but he will be disoriented. If you try an every-man-available attack, watch your health carefully. If you cannot get a crewman back to the ship to heal, use a Med Pack from the inventory. Alternately, you can have your Assault Rifle bearer stand at the bottom of the ladder and guard. It will take him multiple belts of ammunition to kill the Big Mech. When you finish, you will get a Ticket To The Show and a new planet will be added to your star map.

If you have not upgraded your ship, now is the time to do it. See Fleet management for tips on what to upgrade to. See Trading strategies for tips on how to get the cash you need.