Warning: After completing this mission, the UHC Military will become extremely hostile. Now is your last chance to trade without worrying about them. 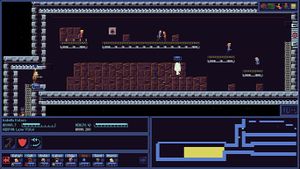 The top of the ladder is handy for sniping the guard.

Climb up the ladder on the fight and kill the two human guards. Climb up the ladder and guard from its top to kill the next guard. You can either run past the rest of the guards to hit the switch, or you can fight them. Kill the guards in the next room by climbing the ladder when they are far from it, shooting them until they get close, and climbing back down. The two guards on the right platform are best killed from the top of the right ladder. After climbing up as far as you can, you will have a long passage to the left with one guard in it.

The humans in the room beyond the vats will become hostile after you talk to them. If a power suit and assault rifle have not dropped yet, you can orbit and wait for the station to re-spawn to increase your chances of getting them. The dialog here will prevent you from collecting them later. Once finished with talking, guard or run. Station Horizon will be abandoned when it re-spawns.