The UHC General's Experimental Frigate has 250 shields, 300 armor, 13.9 speed, and 3 guns (1 Death Beam, 1 engine stopper, 1 Nuke). He will attempt to fly to your ship and attack from on top of it. If you have multiple ships, he will switch between them. One tactic is to place your ships in a huddle, so you can't miss. If you have more ships than he does, you can have one ship use standard weapons and the other use an array of Small EMP Generators fired sequentially. 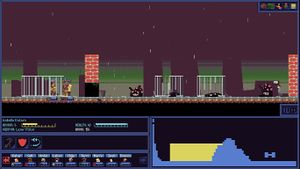 The Abductors cannot go past the wall.

Once you take all armed crewmen to the right side of the hill, guard. Clear the first set of cages, then reload. Repeat on the second set. The third set has two Abductors guarding one informer. Kill the Abductors from the near side of the wall, then talk to the informer. He will give you the coordinates for the Gene Lab if you threaten him.

Bring your whole armed crew down to the bottom level and set them to guard. Have one talk to the General. He will turn hostile and has approximately 375 HP. After you knock his health down, he will change into a new form and take on the characteristics of a large boss. Keep watching your crew's health and administering health packs where needed. (If you orbit before defeating this second form, you will get the end-of-story cut scenes and the credits, but you won't get the 1,000,000 DY reward. You will have to start from the beginning of the boss fight when the planet reloads.) When you defeat the second form, the General will restore his health back to full, eight Abductors will fall off the platform on the right, Trade Co. troops will arrive and move to the attack, and your crew will be moved to the top of the area. Heal your crew if necessary, reload, and go down and do your part. When the General is defeated, you will automatically enter the end-of-story cut scenes. You will come back to find your ship in orbit with everyone on all ships standing around, waiting to be reassigned to their stations. You will also have the 1,000,000 DY reward in your wallet.

These play somewhat like Star Fox, except with slower shots. There are 1500+ names to shoot down, ranging from three characters to around two dozen. Keep tapping the space bar and moving around the screen, preferably toward the largest (and therefore closest) names. If you want to play the credits multiple times without beating the story multiple times, fight the General, but don't defeat his third stage before you orbit.