This planet is optional. The armor drops and 15,000 dy reward (among other things) are useful, but you can just skip Xiwang and fly over to Cylus if you so choose. 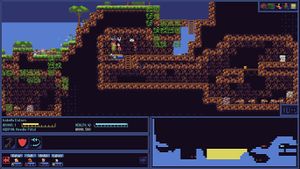 When you first reach Xiwang, only one drop site is available. Land. Disembark your armed crewmen. Head right and

fight the three Boars. Continue right and enter the cave. Talk to the Bounty Hunter. Ignore the Bounty Hunter's advice and keep going. The lower path leads to five Boars. Fight them only if you want loot. The upper path leads to a scroll that will unlock the Underground drop site. Since you now have a Med Box, you can fight the remaining Boars and collect the resources. If your health becomes low, just return to the ship and heal. Hopefully, some Leather Armor will drop while you fight the Boars. Be sure to equip all of it. 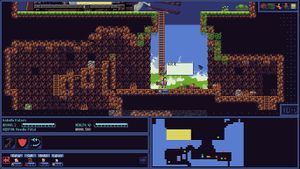 The second-to-last Boar is too far gone to catch.

Try to catch at least one of the Boars before it leaves the field of view. Have one crewman guard on the ledge before the Bat and have the other move closer to trigger it. Then climb down the ladder and use the shoot-and-jump tactics on the Boars. Once they are gone, you can fight the Bats and descend the next ladder. Once down, guard to kill the Bat without taking damage. The Bat on the far right can be skipped, but it is guarding precious gems. Continue through the cave, killing Bats as you go. If you go left at the large cavern, you will find a locked door. You will need to come back to it later. 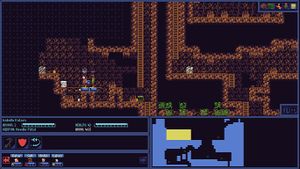 The location of the scroll.

Climb the ladder at the entrance to the large cavern. Go left at the landing to grab another scroll. This one unlocks the Caves drop site. Continue up and kill all the Bats that you can. You can now harvest safely before going to the Caves. 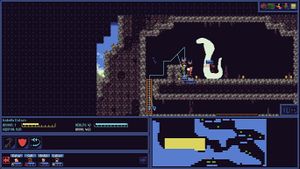 The red shirt should have retreated sooner.

Enter the cave and go up. Kill the Bats and try to shoot the four-legged Small Spiders from a distance or lower level. When you reach the top of the cave, you will see a giant cobra. Use the shoot-and-jump tactics to avoid feeling its 3-damage attacks. You have just enough time to fire two Needle Pistol rounds before retreating. When you finally kill the snake, you will get a piece of TNT. This will allow you to open that locked door in the Underground. You can return there now or clear out the remaining enemies and collect the resources. If you are low on weapons, you may want to grab the Adventurer's Sword while you are here. 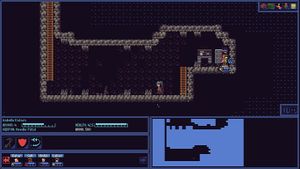 This is a good time to attack.

This area may have respawned. If it did, you'll have to fight the enemies again. Once you have cleared the path to the door, return to your ship and make sure every crewman has full health and full ammunition. Then come back and descend that last ladder. Run across to the right side and try to jump down when Nomad Bryan is in your range. His gun deals 3 damage and has twice the range of a Needle Pistol, so this fight is going to depend on how many guns you have. When he's dead, you will automatically collect the reward and a catalogue. Collect any remaining resources and return to space. Trade Co will contact you about a great place to get information. You can return to Trade Co or continue to the next page of this guide.