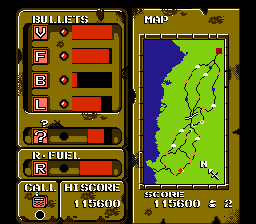 The tank has an energy meter which indicates how damaged the tank is. The meter is decreased when the tank is hit by enemy fire, or whenever you collide with an enemy tank. The meter can be refueled by collecting E tiles, or by running over enemy soldiers with the tank. If the energy meter is ever depleted, the tank will explode, and you will lose one life. If all lives are lost, the game ends, but you have an opportunity to obtain a password to resume your progress later on, or to continue from the beginning of the segment that you died in.

While crossing enemy territory, you will encounter a variety of tiles to collect. Other than the E tile, which provides an immediate boost to your energy meter, all tiles can be stored and activated later on through the sub-screen. Press

to view the sub-screen and activate or deactivate whichever items you wish. If an item is fully used up, it is automatically deactivated.