It Came from the Desert/Combat

If you do a wrong move early in day 1, your house will catch fire and you have to extinguish the fires quick enough before they expand and multiply. Have the top of your extinguisher slightly below a flame's "base" and press fire to extinguish it. 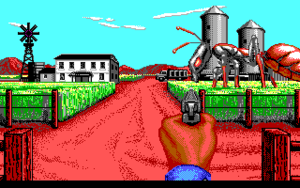 An ant on patrol

From time to time, you will encounter ants on patrol. These ants seem indestructable at first, but Dr. Platt will eventually tell you how to defeat them.

On the first encounter, you will see a single ant on patrol. You will need to kill it by aiming your shots to hit the antennas; try using the lower leg joints of the ant in order to align your shots, and adjust your aim. If you run out of bullets, you will reload the chamber and wait.

When the ant leaves the left side of the screen, it will make a second attack at point blank (although it may sometimes return you to the world map with no time loss, but it's flagged as if you didn't kill the ant). This is your last chance to shoot the antennas before the ant sends you to the hospital. Being mangled by the ant will cause you to be hospitalized for two days instead of one - try to take it out.

When the ant is killed, you will be attacked by a swarm of ants; see below. 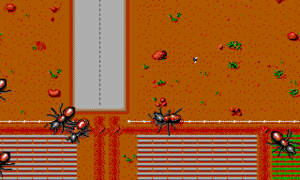 After killing a single ant, or entering an area that is under heavy attack, you will be dropped into a combat situation.

Ants will either approach from offscreen, or by crawling out of the ground.

Your grenades are thrown about one ant-length; if you land a direct hit, you will kill a given ant; near-misses may also kill the ant, but they can survive them just as easily. Your goal is to destroy enough ants until the swarm retreats; destroying four or five ants will repel early levels, but the larger ant swarms later in the game require more casualties to repel. In the final swarms, it will take more casualties than you have grenades.

If you run out of grenades, run. If you travel far enough, you will eventually collapse from exhaustion but this is preferable to potentially losing two days by being attacked by an ant.

On your way to Quarry, Ice and the Hellcats will dare you to a chicken run, they will try to run into your car and push you off road. Press forward to speed on, and as soon as possible turn to the left lane. The Hellcats will be coming straight toward you and they will chicken off.

You see a top-down view of you and your opponent. Your moves left, right and down are defensive, while pressing them with fire, or forward, are offensive. After some time your stamina will wear off, and a single hit will suffice to drop you down; same with your opponent's.

At the first levels, you can dumbly and blindly win your opponent (like Bret) by quickly hitting fire + right repeatedly. Eventually you will knock him out. Later opponents are more sophisticated, and you should time your attacks, eg. when they open their front trying to hit you.