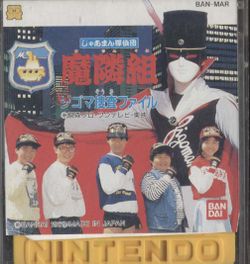 The game follows a sub-genre of Japanese adventure games that include a top-down RPG style world map to walk around on, rather than simply selecting destinations from a menu. Otherwise the game is similar to other Famicom Portopia/Tantei Club-derived detective adventure games; the player must search for clues, talk to witnesses and suspects and solve inventory-based puzzles in order to proceed.