Difference between the NES and FDS versions[edit] 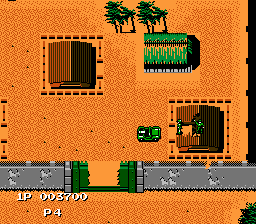 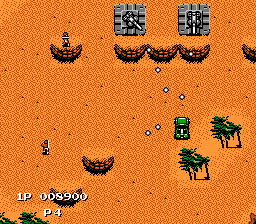 It's hard to hit cannons on bluffs. 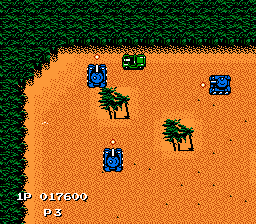 Four blue tanks will appear, and chase you around the small clearing. The trees may get in your way as you try to drive away from them. These tanks appear one by one until all four are on the screen with you. They chase you around, firing fast bullets at you, but they aren't as manueverable as your jeep. They can be hit by bullets or explosives, but if you have exploding rockets, the explosions will not harm them; you must hit them directly with the rockets. One hit from explosives or four bullets will turn them from blue to brown. Another explosive or four bullets will finish them off. Focus on destroying one tank at a time, but don't hesitate to switch your attention to a different tank if one becomes easier to hit. 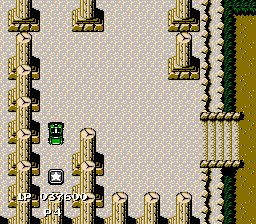 Find this star to power up. 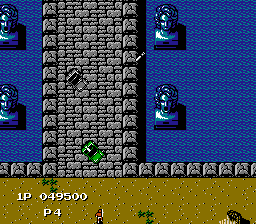 Avoid the missiles from the heads. 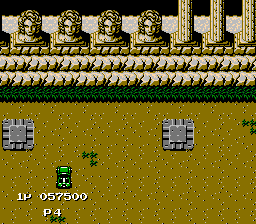 The boss is four face statues side by side at the top of the screen. They each fire heat-seeking missiles at you, one at a time, from the right to the left. You'll have to shoot explosive weapons at them three or four times to destroy the statues. While you attempt this, you have to watch out once the missiles begin to appear. Back off as soon as you see one, and use your gun weapon to destroy the missiles. Once it's safe to resume your attack, drive back up and hit each statue as quickly as you can. You won't have a lot of time before the next wave of missiles start. In addition, a tank may appear from the bottom of the screen. Destroy them as soon as they are visible. When you're down to one statue, you won't have to worry about backing off anymore. 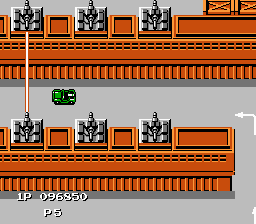 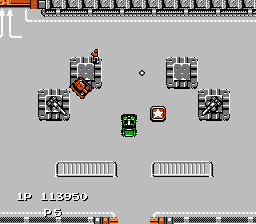 Collect the star to destroy every enemy. 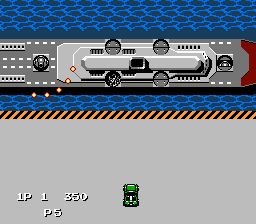 Take out all six ship turrets.

The boss is a series of spreadshot turrets mounted on a ship. In order to destroy the ship, you must destroy all six of the turrets. They occupy hatches that open up so they can fire, before closing again. The turrets are only vulnerable to attack when the hatches are open. Fortunately, it only takes one explosive to destroy them, but you must hit them dead on, you can't harm them with rocket explosions. Additionally, tanks will appear from the bottom of the screen to make things more challenging. (Note: in the FDS version, the boat is oriented vertically in the middle of the screen.) 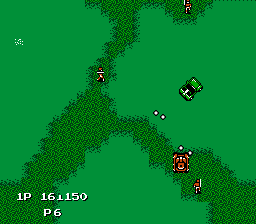 Don't drive through the thick grass. 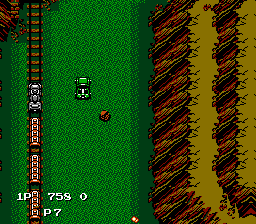 Watch out for the train behind you. 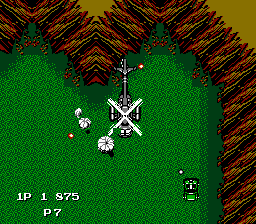 Trade shots with the helicopter.

The boss of this stage is a giant helicopter. It rushes on to the screen from the top and flies about halfway down the screen while firing bullets at you. It drops three soldiers off who parachute down, and proceed to attack you while the helicopter flies away to get reinforcements. It's only vulnerable when visible on the screen, but it will take direct aim at your jeep, so you have to move constantly while firing at it. Take as many shots as you can, moving immediately after doing so. Then when the helicopter flies away, clear the area of the soldiers that have dropped down. Wait for the helicopter to reappear, and be prepared to fire at it as soon as you see it. It should take seven hits from explosive weapons to destroy it. 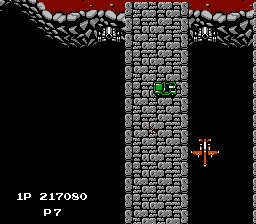 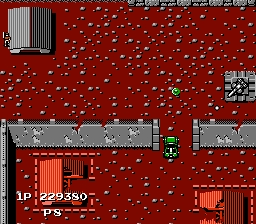 Watch out for this landmine. 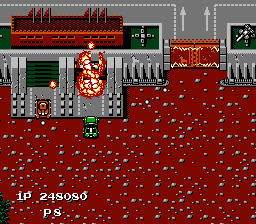 The boss of this stage is a large fortress. The fortress has an electrified gate that can't be destroyed until the entire fortress is rendered defenseless. There are five roof mounted cannons, two on the left, one on the right, and one on either side of the gate. The key to defeating the fortress, however, are the four garage doors that open and release tanks. At the top of each door is a flashing light, only visible when the door is open. You must destroy all of the lights above each of the four doors. Once a light is destroyed, that door will produce no more tanks. It's a good idea to get rid of the roof mounted cannons first, so that you have less to worry about while you focus on the doors. Then park your vehicle in front of one of the doors and fire at it when the door opens until the light is destroyed. Watch out for any tanks that appear from the door you weren't attacking. Once you've destroyed all four doors, the field surrounding the gate will disappear, allowing you to blast it and pass through it to the next stage. 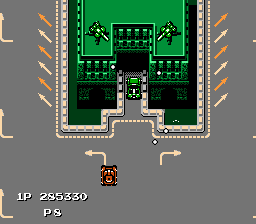 Take out the roof mounted cannons. 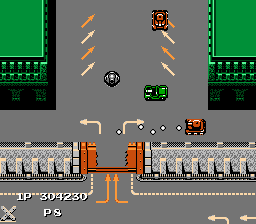 Watch out for the ground turret. 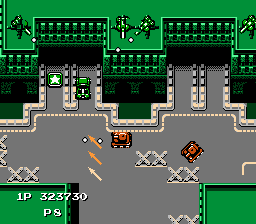 Collect this star to power up. 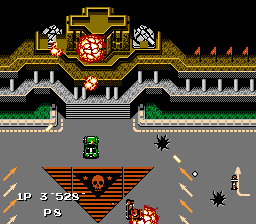 Don't worry about the cannons, shoot the building.

The first boss that you must face is a near replicate of the final boss at the end of the arcade game. Two laser cannons stand atop a large building in the center. These laser cannons are actually not much of a concern. They fire lasers in three different directions, and they are very easy to dodge if you park yourself directly in front of the building. You won't even have to move. You will have to worry about any tanks or helicopters that show up throughout the fight. Otherwise, focus all of your attack on the building itself. The lights inside will flash more and more rapidly as you get closer to destroying it. 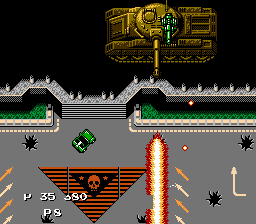 Take out the giant tank as quickly as possible.

Once the building is destroyed, the true boss appears. The true boss is a gigantic tank with a main turret and a side gun. The tank moves to the left and right throughout the fight, stopping only momentarily to fire. The main turret can not move, but shoots a giant blast of flame down the screen whenever the tank stops. The side gun fires bullets continuously, and can adjust its angle to aim at you. However, the tank moves back and forth so much that even when the gun shifts its aim, it's rarely on target. You have to worry move about errant bullets than those that are aimed directly at you. When the tank moves from one side to the other, you're best off moving in the opposite direction to avoid getting shot with flame. When it's safe, focus your attacks on any point on the tank. It will eventually become more red as you get closer to defeating it. Once it's destroyed, you have won the game.