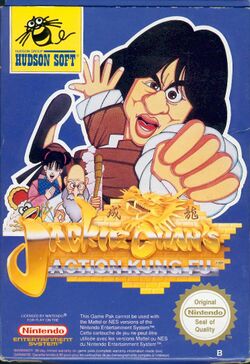 Jackie Chan’s Action Kung Fu is a platform game develped and published by Hudson Soft for the NES. It was relased in North America in December 1990 and in Europe in 1991. Two other versions, titled only Jackie Chan, were released in Japan in January 1991: one for PC Engine, and one for Famicom.

The player controls Jackie Chan, the famous martial arts expert, during his mission to rescue his sister Josephine, who has been kidnapped by an evil sorcerer.