Kahu arrives at the temple with nothing but 100Y in his pocket. Talk to the people around you to get an introduction to the area. The Cocoon Master references they are talking about refers back to the old term used by Jade Cocoon: Story of the Tamamayu. The two birdmen will explain the bulletin board. The Alco and Og BeastHunters explain what BeastHunters are and suggest Kahu should go to the Jade Throne Room to get a BeastHunter license. Until you get the license you won't be able to to any bulletin board missions. To proceed go to the large ornate yin-yang symbol on the floor and press

to go to the Jade Throne Room. This floor tile is your only means of travel between the floors.

Levant greets Kahu and explains what is going on. He needs help keeping the Kalma in the Wormhole Forest under control and is gathering BeastHunters to help fight them. He gives Kahu a BestAmulet. It is magic amulet that lets you use Divine Beasts. After this he gives him the option to take the game's tutorial: Walking through the Wormhole Forest. If you choose to do this then go to the Kumari Gate on the left to begin. 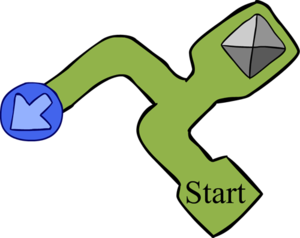 The ogrevines in the forest are the rooms of the Wormhole Forest's dungeon. As you move around the map information will be updated in the lower right corner. This first area has only 1 ogrevine. The in game map displays unexplored ogrevines as grey squares. Once visited the icon turns red. Go inside and you will be told how the plants work. The birdman will explain how picking up items works. Pick up the Tamatoch egg on the floor and investigate the glowing plant behind it. It will spit out keyspores. These are required to open the princessvine so you can progress to the next level. Eat the keyspores and exit the ogrevine. The blue icon on your map is the princessvine. Go there to jump to the next island. Once you reach Training Forest 2 Levant will insist you take a break by using

to access the menu and return to the temple with the Go Temple option.

The first part of your training is done. Now you need to visit the other areas of the temple to get your Divine Beast.

For now the birdmen on either side are not going to be of any use. The one to the left is used to see what Beasts you have owned before while the one to the right will rename your Divine Beast. Talk to the woman in the center to hatch the Tamatoch egg you found. Hatch the egg and give it a name. Since it is a fire type Divine Beast it is placed in the center of the fire side of your Beastamulet.

At the Arena you will have a tutorial on elements and battle. For an in depth guide on this please refer to BeastAmulet strategies. During this lesson you will be loaned a Slimy, Gara, and Alco so there is a Divine Beast on each side of the BeastAmulet. Afterwards she will allow you to keep one. Choose whichever Divine Beast best fits your playing style. The other two you didn't choose can be easily bought from Kikinack & Co. as an egg after all training is completed. Before you are able to continue a Na BeastHunter will stop you to explain reputation and how to improve your BeastAmulet.

Return to the Jade Throne Room and Levant will explain your final test.

The final test is fighting in the forest and defeating a teacher disguised as a Kalma. This time around you are able to travel beyond the first forest. You will start out in Training Forest 1 again. 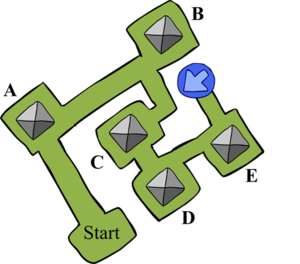 The only ogrevine on this floor will be empty and there are no enemies here. Training Forest 2 is where the real test begins. There are about 4 wild Dondrakiches in the paths outside of the ogrevines. These enemies should be easily defeated if you alternate between using both of your Divine Beasts. If you become dangerously low on HP or MP either return to the temple to instantly heal or visit ogrevine E. Ogrevine E has a plant bud that sparkles in a similar manner as the ones that hold the keyspore. If you interact with it it will fully heal all of your Divine Beasts' HP and MP. Ogrevines A, B, and C will either be empty or have a random item inside. Ogrevine A contains a Na beasthunter that will explain MP and how it works. Behind him is the Keyspore.

Before moving on to Training Forest 3 through the princessvine be sure to have a healthy team. There is a big battle ahead of you.

This forest only has 1 ogrevine to the left of the entrance. Inside is the Alco Beasthunter that is your teacher. He will go over the basics about Kalma and challenge you to a battle.

After the battle proceed up. This will trigger the cutscene of Kahu becoming cursed. An evil Kahu will attack you. The battle with the evil Kahu is not impossible to win, but extremely difficult to do without massive leveling. He only provides 100 exp to a single beast and 50 if both are still alive. After the battle is finished the fairy Nico will approach you. By touching her cocoon Kahu both woke her up and became cursed. For now this has given Kahu an unsightly tail and a talkative new friend. Another cutscene brings them to the temple to report what happened to Lavant. Kahu is given the task of gathering the 4 orbs at the ends of the 4 forests.