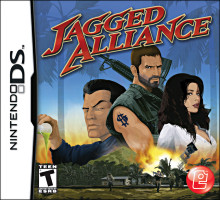 Jagged Alliance takes place on the fictional South Atlantic island of Metavira, a former nuclear testing site. The nuclear tests altered some trees on the island, and several years later it was discovered by a scientist, Brenda Richards, that those trees, known as Fallow trees, produce unique sap that proves to be a medical marvel. However, Brenda also discovered that the trees could not reproduce.

Her assistant, Lucas Santino, realised how profitable this sap would be. He managed to convince Jack Richards, the leader of the scientific mission, that it would be beneficial to have two independent science teams. Santino consequently established a new base on the other side of the island. He immediately began to recruit new people and gradually took over the island by force.

When the game begins, the player is contacted by Jack Richards and is invited to the island. There, Brenda and her father request that the player hires mercenaries through the Association of International Mercenaries (A.I.M.) to reclaim the island from Santino's forces sector by sector.

The player starts the game and every following day in a room. Here the player can load and save the game, change settings, hire new mercenaries or sleep until the next day.

When the player starts a new day he is transferred to a screen displaying Metavira on a square grid. The map includes information such as the number of Fallow trees in each sector, whether the sector is enemy or player controlled, how many guards and tappers are in a sector, and the terrain information. The player can also decide what mercenaries and equipment to take and what player-owned sector to start from.

Mercenaries, guards, and tappers need to be paid; if needed, the player can raise the guards' and tappers' salaries to make them happier. Mercenaries can be left at the base to either heal, train skills, or repair items. Occasionally, Jack or Brenda Richards contact the player with an important objective, such as securing a clean water source. These requests can be ignored, but usually cause some kind of hindrance to the player at a later date.

When player characters and enemies are in the same sector, the game switches to turn-based play. Both sides take turns to move and perform actions, which uses their action points. The number of action points is determined by the character's attributes. Tougher terrain surfaces on the ground use up greater numbers of action points. Interrupts are possible. Mercenaries can also crouch to make themselves a smaller target or take cover behind objects. It is possible to walk backwards and move stealthily so the mercenary can avoid being noticed by the enemy, though both of these actions uses more action points than normal moving.

When attacking, there is a certain chance that the mercenary will hit. The chance to hit is also affected by the amount of action points the player uses to aim. Attacks can be done in a wide variety of ways, using firearms, close combat weapons like knives, throwing weapons such as hand grenades and explosive devices like land mines. When the day ends mercenaries return to the base for sleep. The day can also end during a battle and mercenaries might suffer additional injuries as they retreat from the enemy sector. The sector is conquered when all the enemies are killed or is lost when all the player's mercenaries, guards and tappers are killed or otherwise neglected from posting guards.

The main characters in the game are the hireable mercenaries along with other NPCs, such as the player's employers Jack and Brenda Richards, and the main antagonist, Lucas Santino. There are also four native characters that might be offered to the player as guides. The player can only control the mercenaries. Guards, tappers and enemies are controlled by the AI.

Every mercenary has four attributes - health, agility, dexterity, wisdom, and four skills - medical, explosives, mechanical and marksmanship. Health determines the amount damage a mercenary can take, agility determines how many action points they have, dexterity helps in using weapons and other items in their various conditions, wisdom enables mercenaries to get experience quicker, medical helps to heal wounded characters, explosives helps to disarm bombs and activate the mercenary's own explosives, mechanical helps to pick locks and combine items together and marksmanship helps to get a better aim and shot on enemies. The mercenaries employed by the player gain experience from the actions they perform. For example, a mercenary that bandages a wound might improve his medical skill. Mercenaries may also permanently lose attribute points from an injury. For example, a hit in the head might reduce mercenary's wisdom or a hit in the leg might reduce his agility.

Additionally, every mercenary has an experience level that determines how much he gets paid; and when a new level is obtained they demand a raise that the player either has to agree to, or lose the mercenary.

Each mercenary has a unique personality. There are several characters that are not fond of certain other mercenaries, and can decline joining the player's team for this reason. Some characters can still be hired but will later complain about the other mercenary. Either mercenary may leave the player's group during the night and is shown to be missing on the A.I.M. site. There are also stubborn characters that might refuse to move until an enemy they were targeting has been killed or the enemy moves out of the mercenary's line of sight.

There is a large variety of items in the game - some of them play a significant role in the plot while others are there for use.

When the player hires a mercenary he arrives with weapons and equipment. The player can equip the mercenary with various body armour, helmets, goggles and radios. There are standard vests that have pockets along with vests with no pockets that act as body armor. The vests with pockets may have two to five pockets and each one can hold either one particular item or a number of identical items like magazines or hand grenades. Mercenaries can also carry things in their hands.

The player can store an unlimited number of items in the base, but has to transport them with the mercenaries from the sectors to the base.

On 26 August 2008, Empire Interactive announced that a Nintendo DS version was in development by Strategy First and Cypron Studios. The game was originally announced for release on 17 February 2009, but was later pushed back to 5 May 2009 in America and 26 June 2009 in Europe.

The game differs in many ways from the DOS version. Graphics have a smaller scale and a very different texture on the sector maps. There are completely new music tracks and improved cinematic cutscenes. Features removed include item repairs, item conditions, bandage points, moving backwards, door manipulation closeups and deadly eels in the water.