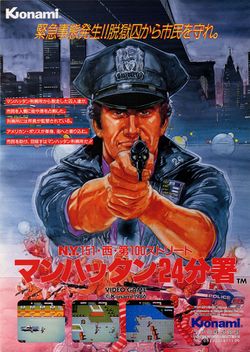 Manhattan 24 Bunsho (complete Japanese title: マンハッタン24分署: N.Y.151・西・第100ストリート, lit. Manhattan 24 Bunsho: N.Y. 151 Nishi Dai 100 Sutorīto), released in the United States as Jail Break, is a run and gun arcade game, that was released by Konami in 1986; it runs on a modified version of the hardware utilised in Green Beret (a Motorola M6809 running at 3 MHz, with a Texas Instruments SN-76496 running at 1.536 MHz for music and effects, and a Sanyo VLM-5030 running at 3.58 MHz for speech), and is the third-last title by the company to feature their "original" logo on its title screen. It also has the same voices as all other games with a VLM-5030 (for only two people, one male and one female, recorded data into it in 1983), and is based upon the 1981 film Escape From New York.

The player must use an 8-way joystick to take control of a lone police officer on a mission to rescue a prison warden taken hostage, with two buttons to make him fire off shots at convicts and switch to his next available weapon; he initially starts with only a pistol, but can gain two extra weapons (which are a bazooka and a tear-gas gun) by rescuing innocents (but if he should accidentally kill them or die he will be back to just the pistol again). At the end of the fifth stage (which takes place inside the prison), the police officer will come to the warden who is tied to a chair and guarded by several convicts - and if he should accidentally shoot him, the game shall immediately end regardless of how many lives he has remaining (but if he manages to avoid it, the game shall start again at a higher level of difficulty).