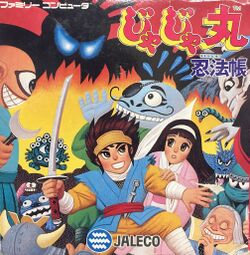 Unlike the two previous Ninja Jajamaru-Kun games, which were action platformers, Ninpou Chou is a traditional JRPG. The player walks around a world map visiting towns and dungeons and occasionally fighting random encounters using a separate turn-based combat screen. There are only two playable characters – Jajamaru and Princess Sakura – and you can only fight one enemy at a time. When you level up, you may be taught a new skill by Buddha himself. There are three chapters in the game. When you begin each chapter, you start back over at level 1. Upon completing all three chapters, a fourth a final chapter occurs, which lets you retain your level of experience.

Although unpublished outside of Japan, the game was slated for a 1990 US release with the name Taro's Quest. In spite of having been canceled, an incomplete prototype version of the ROM exists. As well as an English localization, the game appeared to have had its graphics almost entirely redrawn in order to better appeal to a Western audience. While the prototype is playable, it is only about two thirds complete. An English fan-translation patch has been developed for the original Japanese game, which can be found here.