From StrategyWiki, the video game walkthrough and strategy guide wiki
< Jajamaru no Daibouken
Jump to navigation Jump to search

Jajamaru is back to rescue Princess Sakura from the clutches of the Catfish Pirate once more. He is no longer confined to a limited space that he runs back and forth in. Now he must continuously run to the right in order to reach the stage exit. Along the way, he must avoid the weapons that enemies throw at him, and he must also avoid the lethal touch of certain enemies that can kill him instantly. As always, he has an unlimited number of shuriken that he can throw to dispatch the enemies. Defeated enemies release spirit energy known as Tamashi that Jajamaru can capture for extra points. If he catches 50 Tamashis, he will also earn an extra life. Jajamaru must fight a mini-boss every other stage. If he wins, he earns extra points, but if he loses, he doesn't suffer any consequences, he simply advances to the next stage. In each stage, there are blocks that are colored differently, that Jajamaru can jump into with his head and break open. Often times, there will be an item for him to collect, but sometimes a bomb will appear instead, which Jajamaru must avoid touching.

Poor Princess Sakura has been kidnapped by the evil and ugly Catfish Pirate, and she is hoping that Jajamaru can repeat his former feat and rescue her again. She is being held captive, and appears every 10 stages when Jajamaru and the Catfish Pirate have their confrontation. Jajamaru fights the pirate atop his giant frog, and if the pirate is defeated, Princess Sakura will jump off the building to land on the frog behind Jajamaru. 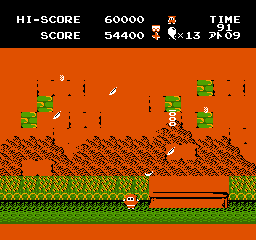 Tornado
If you happen to grab three different power-up items (the flashlight, shuriken, cart, or potion), the third one that you collect will not grant you its usual power. Instead, you will activate a powerful ninja tornado. The screen will flash, and Sakura leaves will blow throughout the stage, instantly killing any enemy who makes an appearance while you travel through the stage. It lasts quite a while, and you earn 1000 points for every enemy who is instantly destroyed.

Gamapakkun
Jajamaru's giant frog, Gamapakkun, will appear in blocks from time to time. If you find him, touch him and you will be riding on his back, and completely invincible to all enemy attacks. Crash the frog into your enemies to defeat them instantly. He can jump high in the air, but he can't land on any platforms. He merely crosses along the floor. Every tenth stage, Gamapakkun appears automatically to help Jajamaru defeat the Catfish Pirate and rescue Princess Sakura. On those stages, Gamapakkun has the ability to belch fire at the Catfish Pirate. He can only take so many hits from the pirate's bombs before he is done in.

[Go to top]← Jajamaru no Daibouken | How to play | Enemies →