From StrategyWiki, the video game walkthrough and strategy guide wiki
< Jajamaru no Daibouken
Jump to navigation Jump to search

Jajamaru no Daibouken is broken up into 20 different stages. Once 20 stages have been completed, the game continues with the very first stage, but at a higher level of difficulty. There are two main types of stages, divided evenly between the even stages and the odd stages. 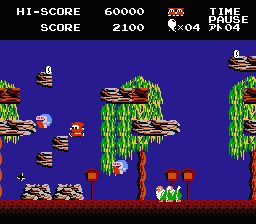 Odd stages contain most of the action

The odd stages are where a majority of the game play takes place. In the odd stages, you will start on the far left end of the stage, and must run to the right in an effort to reach the exit without getting killed. Along the way, Jajamaru will encounter enemies, most of whom can only kill by hitting Jajamaru with a projectile that they throw, but also a few who can kill him simply by touching him. Jajamaru must fight back and remove any potential threat by throwing his shurikens. Defeated enemies turn into Tamashis; spirits that can be collected for bonus points. If Jajamaru collects 50 of them, he will be awarded with a bonus life. Along the way, Jajamaru can travel over the ground, or jump onto the platforms situated higher up. Many of the platforms contain discolored blocks that can be hit from underneath in order to reveal items. Some items like coins or gems are only good for bonus points, but other items provide Jajamaru with power-ups, and the potential to invoke the Tornado ninja-art if he can collect three distinct power-ups. Each stage has a time limit. If the time limit runs out, the game continues to play, but a flame spirit will appear on the left side of the screen and bounce around, getting closer and closer to Jajamaru each time. The flame cannot be defeated, and will kill Jajamaru if he gets hit by it. The individual odd stages will be described in further detail below. 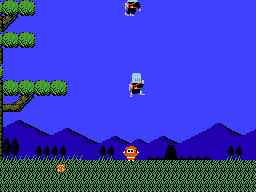 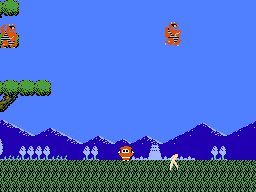 The even stages are a lot shorter than the odd stages. The first four even stages are a battle with one of the "Big Four" mini-bosses. The fifth even stage is a battle with the Catfish Pirate and is described in more detail below. Every mini-boss battle takes place on the same stage, a short stage that scrolls in both the left and right directions. Jajamaru will throw his shuriken straight up into the air, and must hit the mini-bosses three times in order to cause them to explode, while avoiding the projectiles or beams that they send to the ground. If Jajamaru dies in a battle with a mini-boss, he does not lose a life, but he is not allowed to try again either. Instead, he will be instantly sent to the next stage. In this respect, mini-boss battles are more like bonus stages. They can only help to raise his score, and can't be counted against him. After Stage 10, every mini-boss battle occurs with two of the same mini-boss attacking at one time. Both mini-bosses must be defeated before the time limit in order to claim the bonus. 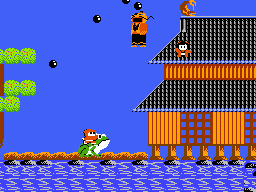 Battle against the Catfish Pirate

Every tenth stage is a battle against the Catfish Pirate. You will automatically be riding atop your giant frog companion, Gamapakkun. You control Gamapakkun and direct him to leap to the left or to the right, and when to jump high in the air. When you press

, Gamapakkun will belch a large ball of flame in whatever direction he is facing. You must hit the Catfish Pirate, who also bounces around the stage, with four blasts of fire in order to defeat him and rescue the Princess. To stop you, the pirate will toss a considerable number of bombs at the ground. Gamapakkun will weaken with each hit that he takes, and you will lose a life if Gamapakkun is struck by four bombs before the Catfish Pirate is defeated. Once the battle is over, leap to the right so that the Princess can jump down off the roof and land safely on Gamapakkun. 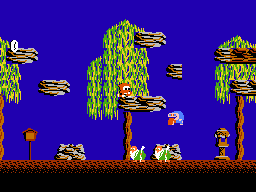 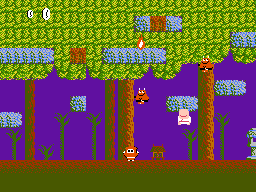 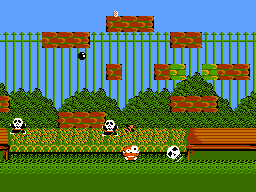 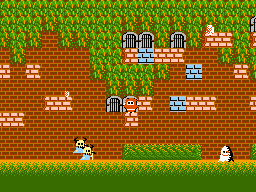 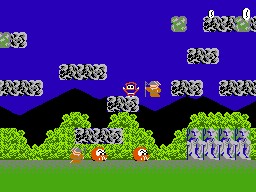 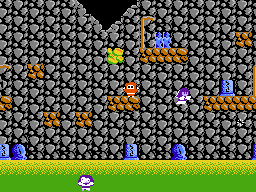 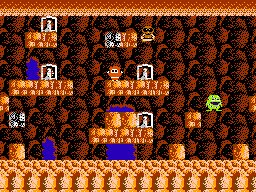 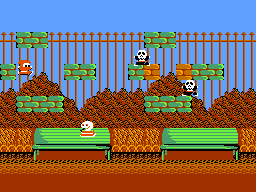 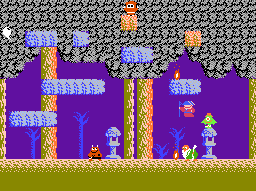 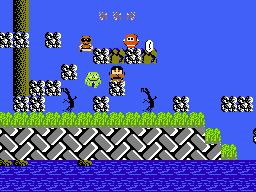