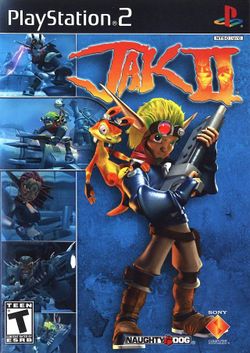 Jak II is a third person platform action-adventure video game developed by Naughty Dog for the PlayStation 2 console and is the second installment of the Jak and Daxter series. The game was released in 2003 throughout North America and Europe, where it was titled Jak II: Renegade, and in Japan in 2004 where it is addressed as both Jak II and Jak Cross Daxter 2 (ジャック×ダクスター2, Jakku Kakeru Dakusutā Tzu?). The game is followed up with Jak 3 in late 2004, which finishes the trilogy. The game Daxter serves as a mid-quel, chronicling Daxter's search for Jak.

While Jak II keeps the platformer core of its predecessor, its urban environment, mission based story progression, and some of it's new game mechanics have more in common with games in the GTA series. In this game Jak can use guns of various types in addition to his punching and kicking moves from the first game. He can now use Dark Eco (now a collectable instead of a hazard) to transform into Dark Jak. Dark Jak has enhanced fighting abilities and can use several additional moves.

The central hub for the game is Haven City, a bustling metropolis with maze-like streets. There are pedestrians at ground level and zoomers flying around just above their heads, so avoiding traffic is a major concern. The main obstacles here though are the Krimzon Guard. While they will usually just ignore you, if you do anything to injure one of them or damage one of their vehicles they will go into alert mode and attack you on sight. If you can avoid them though, they will eventually lose track of you and return to their usual patrol mode.

Around midway through the game you obtain the Hoverboard. This gives the game a Tony Hawk style skateboarding element, though it hovers in the air as in Back to the Future II. It greatly improves your mobility and many of the later missions require shredding and grinding, so some skill with the Hoverboard is necessary to complete the game.

Progression through the game is mission based, meaning you are given certain missions to complete and doing so earns you rewards, allows you to explore new areas, and triggers additional missions. Some missions occur within Haven City, but most take place in additional levels, usually in the wilderness outside the city.