Jak and Daxter: The Precursor Legacy/Characters

Daxter in his human form. 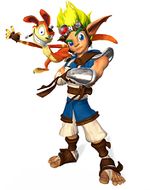 Jak and Daxter are two friends that live in Sandover Village. As usual with many pairs of friends, they are a truly 'odd' couple: Jak is the strong, silent type while Daxter is a seemingly endless source of wisecracks. In the game's opening, Daxter is knocked into a vat of Dark Eco and is turned into an ottsel (part otter, part weasel). Generally, the dangerous Dark Eco is very rare and was stored within silos in various locations at some point in the past by the Precursors. However, there are a group of beings called the Lurkers who are trying to gather all the Dark Eco in the world to turn all of the innocent people in the world into otsels.

It is up to Jak and Daxter to stop the Lurkers' evil plan and find a way to turn Daxter into his normal form.

Also known as Samos the Sage and The Sage of Green Eco. Samos is the parent of Keira and a father figure of sorts to both Jak and Daxter. He serves as Jak and Daxter's guide throughout most of the game. Cantankerous in his old age, he is often shown with little patience or expectations for both heroes. Because of his unusual outwardly appearance, he is often the source of many of Daxter's jokes. In later parts of the game, Samos is kidnapped along with the other three sages by Maia and Gol to help achieve their goal for world domination.

She is Samos' only daughter and the resident mechanic in Sandover Village. At the beginning of the game she is putting on the finishing touches to her prototype A-Grav Zoomer, a large air bike that acts as Jak and Daxter's primary means of transportation throughout parts of the game. She also acts as a guide to Jak and Daxter throughout parts of the game, especially after Samos is kidnapped. In the opening, Keira shows strong hints of a crush on Jak, to which he responds with bashful smiles. However, at the game's end the two nearly share a kiss before interrupted by Daxter.

The Dark Eco sages and the game's main antagonists. After years of exposure to Dark Eco their personalties and physical appearances become warped. They manage to excavate and modify a ancient Precursor robot which they plan to use to open all the Precursor silos and flood the world with Dark Eco so they can redesign it into their own vision.