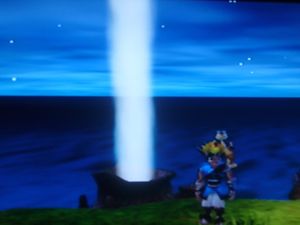 During the opening cinematic, Samos the Sage sends Jak and Daxter through the warp gate in his house to Geyser Rock for some practice. Geyser Rock is a small, tropical island with numerous small geysers. There are no enemies on the island except for the Lurker shark, avoided by staying out of deep water.

Power Cell On the Path[edit]

After you arrive on the island there is a small cliff with precursor orbs grab them and continue along a small valley path. In the middle of the path are two sets of spikes along the ground, between them is a power cell. Jump over the first set of spikes and grab the power cell.

Keep following the path around the island, and you'll find a locked Precursor door. Use the Blue Eco vent located to the right of the door, across a small wooden bridge. The Eco vent will fill up your Blue Eco meter, allowing you to open the Precursor door by simply walking up to it while channeling the Blue Eco. Walk through the door and and get the power cell on the other side.

Make it to the end of the path at the top of the island and there is a power cell sitting there across a small gap. Jump it and grab the power cell. Get down off the cliff by grabbing the floating ball of blue echo. While charged up jump on top of the small precursor platform. The precursor platform will activate and will float back down to the warp gate where you started To jump through the warp gate to go back to Samos's hut

The scout flies all grouped in one place. All seven of them are around a small cliff after you grab the power cell on the path. To open the scout fly boxes you need to dive on top of them by pressing the x and square buttons

. Once you open up the last scout fly box you'll receive a power cell. You can also open the boxes by crouching and punching upward.