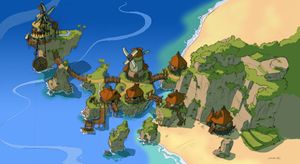 After you arrive back at Samos's hut Kira tells you that you need to collect 20 power cells to power the heat shield on your zoomer to get across Fire Canyon. There are six power cells in the village and 50 precursor orbs.

Bring 90 Orbs to the Mayor[edit]

The Mayor is located in the windmill. The first time you see him he will tell you the blue eco beam coming from the forbidden jungle which powers the village has been cut off and will give you a power cell if you restore it. After he gets done tell you that he tells you to give him 90 precursor orbs for his reelection campaign and he'll give you another power cell. If you have enough precursor orbs, give them to him for the power cell. If you don't, look around village for some more orbs.

Bring 90 Orbs to your Uncle[edit]

Your uncle is located in his house by the windmill. When you see him talk to him he will ask you for 90 precursor orbs so he go one a voyage and in return your uncle will give you a power cell. If you have the orbs give them to him and get the power cell. If you don't have enough then go find more orbs.

Talk to Farmer Zeb who is located on the beach outside his house near the entrance of the Forbidden Jungle. Farmer Zeb will be sleeping outside his house, go wake him up and he will tell you that his yakows have escaped and if you herd them back into their pen he will give you a power cell. Farmer Zeb has 5 yakows located around the beach area. If you smack one they will start walking stay behind them or else they will return back to there starting positions. When you are herding the yakows if you go onto the left side of the yakow they go right, and if your on the right side of them they go left. When you finish herding all five back into their pen go talk to Farmer Zeb and he will give you the power cell.