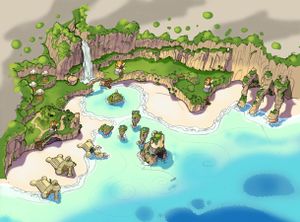 After you return from Geyser Rock Samos tells you that his green Eco harvesters on Sentinel Beach have been clogged up and wants you to unblock them. There are five harvesters. Just hit the rocks underneath each one. Once you unblock the last harvester a power cell is released.

Push the Flut Flut Egg Off the Cliff[edit]

After talking to the bird watcher in Sandover Village you can access the Flut Flut egg by following the beach path up to the waterfall. From here you can jump across a series of ledges to reach the egg. You must attack the egg several times to push it off the ledge.

Get the Power Cell from the Pelican[edit]

At the end of the beach you will see three pyramid like structures lined up near the water. On one of them there is a flock of seagulls resting. Daxter will spot them and want you to chase them for fun. After doing so let them land on the next pyramid then chase them off again. Do it one last time when they land on the last pyramid. The seagulls will fly off causing a rock slide near the Eco harvesters. The rock slide will release a power cell.

Launch Up to the Cannon Tower[edit]

After you activate the blue Eco vents in the Forbidden Jungle, there will be a vent of blue Eco opposite the Cannon tower. After charging yourself with blue Eco from this vent, you can use the various launch pads to reach the tower.

Near where the cannon tower is shooting the metal boxes, there is another power cell on the beach. This one is located at the back of the beach, in a small cove. In that small cove is a power cell. The power cell is easily visible and is hard to miss. Just be careful, there is a serpent lurker hidden in the sand that will pop out when you get close to it.

The pyramid like structures where you chased the seagulls are the Sentinels. Climb to the top of the center Sentinel for a power cell.