Tasking Message: Proceed to a position to the southwest of Taiwan and together with allied Taiwanese naval forces thwart PLAN forces from closing the Strait. You are also responsible for preventing any invasion forces from assaulting Taiwan. Your mission will be completed when PLAN forces withdraw or cease hostilities. You may receive tasking to eliminate designated land targets. Good Luck. 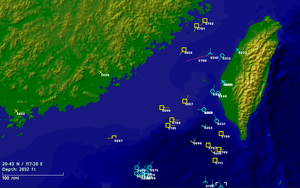 When you start this mission, you will have your main fleet south of the strait, and a few allied vessels just off taiwan. Three aircraft should be active south of Taiwan. To the south is an airfield where you have additional aircraft stationed.

The exact location of enemies may be randomized, but there can be found between your fleet and Taiwan. Some unknown contacts include civilian vessels, thus you will need to identify them to ensure you don't hit the wrong target. These civilian ships tend to be near the western coastline, but there may also be a hostile vessel among them.

You have two additional targets to destroy. The land installations are already shown on the map, but are protected by SAM turrets (not shown). You can fire multiple missiles at once to overwhelm the defense, or launch them in the expectation that they will miss.