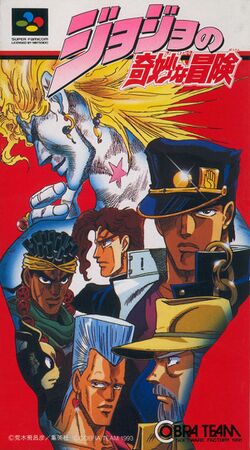 ジョジョの奇妙な冒険 (JoJo no Kimyouna Bouken, JoJo's Bizarre Adventure?) is a RPG for the Super Famicom released exclusively in Japan. It was developed by Winky Soft and published by Cobra Team on March 5, 1993.

The kanji for Kimyouna, 奇妙な, and Bouken, 冒険, are written as きみょうな ぼうけん, respectively, in Hiragana. This identifies the extra "u" vowels (う) in both words, which justifies how we Romanize the game's title.