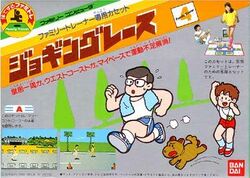 Family Trainer Series 4: Jogging Race is a video game developed and published by Bandai for the Famicom in 1986. It was the fourth of ten games Bandia released for the Family Trainer series. The game required the use of the Power Pad, and simulates several jogging exercises such as Cross Country racing or Marathons, across a variety of terrains and backgrounds. This was the first Family Trainer game that did not see any kind of release outside of Japan.