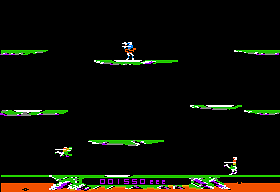 Developed by Atari in 1983. Only a limited number of enemies can appear on the screen at any one time, so enemies replace one another instead of appearing all at once. Eggs do not follow physics, but rather continuously float around the stage, bouncing in diagonals.

Developed by Atari in 1983. As was typical for these two systems, the 5200 version was visually identical to the Atari home computer versions. In these versions the eggs hatch into a complete rider and a bird which varies from the arcade version.

Developed by Atari and published in 1987. Extremely accurate conversion.

Developed by The Rugby Circle and published by Atari in 1986. This 16-bit conversion is remarkably accurate. 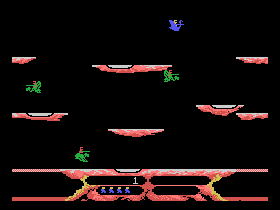 Prototyped by Atarisoft and nearly finished, but ultimately never released. The ROM was discovered on the internet, and cartridges have been produced. 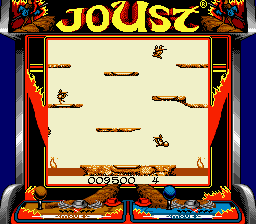 Published by Nintendo in 1995 on a single cartridge with Defender as the fourth in their Arcade Classics series. The cartridge was compatible with, and enhanced by, the Super Game Boy adapter. Control is rather different from the arcade version, and there are only two types of enemy combatants, instead of the usual three from the arcade version and most home conversions.

Published by Midway in 1998 on a single cartridge with Defender. Despite the reduction in resolution, the gameplay is very accurate to the arcade version.

Developed by HAL Laboratory in 1987. Japanese Famicom version shown. The American version adds details to the graphics, which makes the Famicom version more visually accurate to the arcade version. 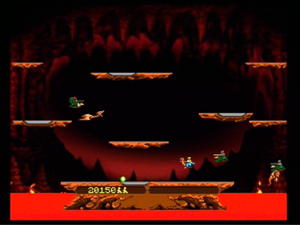 Developed by Digital Eclipse Software, Joust launched on the Xbox Live Arcade in 2005. Although it is presented with an impressive upgrade in graphics, the gameplay itself is extremely accurate to the arcade, so you get the best of both worlds. The egg waves are all identical though, where in the arcade version, they are random.