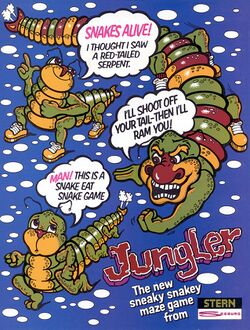 Jungler is a multi-directional shooter arcade game that was released by Konami in 1981, and was licensed to Stern Electronics for U.S. manufacture and distribution; it runs on a modified version of Namco's Pac-Man hardware with the video system used for both Rally-X games (a Zilog Z80 main microprocessor running at 3.072 MHz, but with an added Zilog Z80 sub-microprocessor running at 1.789772 MHz and two General Instrument AY-3-8910s running at the same speed for audio). The player must use a 4-way joystick to direct a white snake-like ship around a maze in pursuit of three similar-looking differently-coloured CPU-controlled enemy ships, with a single button to make it fire bullets at them - and when both the player and enemy ships are hit by each other's shots, they will lose one segment of their bodies (they also die immediately if they try to run over a ship of greater length than they are). When the player runs over an enemy ship of lesser length, each segment is worth 80 points; however, shooting a segment of any enemy ship is merely worth 60 points (apart from their heads which are worth 500 points when destroyed in this way). In addition, bonus items occasionally appear in the mazes, and if the player eats one it is worth 500 points (it also adds an extra segment to his or her ship) - however, each maze has dead ends that the enemy ships shall eventually get trapped in, so the player only has a short amount of time to kill them all before they self-destruct, depriving him or her of the points for killing them (their speed also increases as they lose more segments so the player must use the mazes' features if wishing to catch up with them).