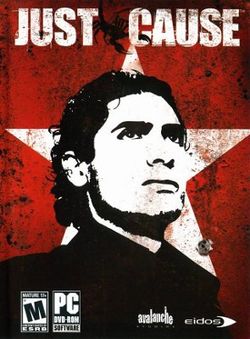 Just Cause is a third-person shooter developed by Avalanche Studios and Eidos Interactive. It was released in 2006, and is notable for an open-sandbox gameplay across a large map.

It is set on a Caribbean archipelago called "San Esperito", where Rico Rodriguez is assigned by the Agency to overthrow the dictator, by assisting the guerrilla resistance in reclaiming cities and by triggering warfare between criminal cartels.