Released by Atari in 1982. Considered one of the most accurate and faithful ports of an arcade game that Atari ever made for the 2600. Contains multiple variations that control when or whether an extra life is granted, whether or not Evil Otto appears, and whether he can be shot in order to temporarily remove him from the stage. 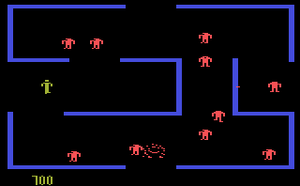 Released by Atari in 1983. Incredibly accurate, it even includes voice synthesizing to capture the speech that the arcade game contained. The same program was intended for release on the Atari 400/800 home computers, but was ultimately canceled. A leaked version of the prototype appeared shortly after the title was canceled.

Released by GCE in 1982. Despite the fact that the arcade used raster graphics and the Vectrex uses vector graphics, the conversion to the Vectrex is remarkably accurate and easy to play. As with all original Vectrex releases, a translucent color overlay was included with the game to provide the graphics with some semblance of color. 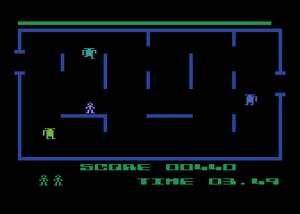 In the absence of an official Berzerk port, CBS Electronics released Shoot-out as part of their K-Razy series of games. Shoot-out was a Berzerk clone that changed a few things. Only three robots ever appear at one time, and a new robot materialized to replace the last one destroyed, until the stage limit of robots had been reached. Instead of Evil Otto, a timer counted down the time remaining on the stage. The game ended if you did not leave the room before the timer ran out. 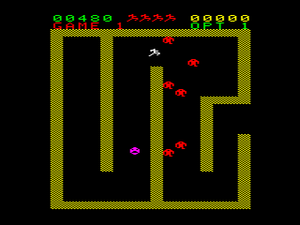 Released in 1982. A simplified version of Berzerk, only one enemy robot could move at a time, until the evil face appeared, at which time, only the face would move sweeping the entire screen. 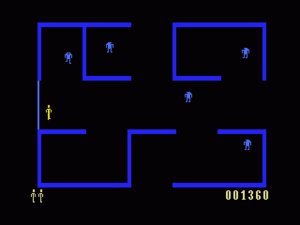 Released by Aackosoft in the Netherlands in 1985 and by Eaglesoft in the United Kingdom in 1986 under the name of Robot Wars. It is written by a Dutch programmer under the pseudonym of Lex Luthor and is a fairly consistent copy of the original, apart from a more gradual increase in difficulty and the absence of the voice, which would consume too much computer power. 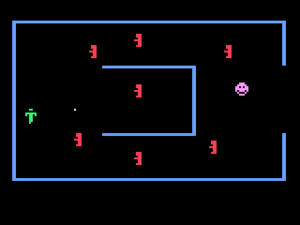 In 1998, John Dondzila created the first new Odyssey2 game in 15 years. A tribute to Berzerk, Amok! is a surprisingly well done adaptation. It lacks small features like animation, and the evil face moves in such a way that it can be avoided if necessary, but for an Odyssey game, it's very enjoyable.