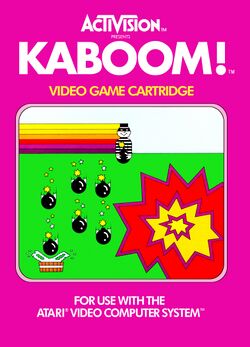 Kaboom! is an Atari 2600 game published by Activision in 1981. It was subsequently released for a variety of platforms. The game was very successful, selling over one million cartridges by 1983.

When Kaboom! was originally sold, anyone who scored above 3,000 points could send Activision a picture of their screen and receive membership in the Activision Bucket Brigade and also receive a Bucket Brigade patch.

In 2002 it was included in the Activision Anthology compilation for several modern platforms. The Atari 2600 version is also available on GameTap.

The game consists of using a set of three buckets to catch bombs dropped by the "Mad Bomber", a man wearing striped prison clothes and a robber's mask. Points are scored for every bomb extinguished. A bucket is lost every time a bomb falls off the screen. Extra buckets are awarded at every 1000 points, but there can only be three at any given time. The longer the game is played the faster the bombs fall, making each of the difficulty levels more challenging than the last. The game has a maximum score of 999,999 points.

On the default difficulty level, the buckets are at their normal size. Pressing difficulty switches to the A setting makes the buckets half this size, and therefore makes the game much more difficult.

Each bomb successfully extinguished earns you points (depending on the wave you are playing). The points you gain for each bomb depends on the speed of the bomb and which wave it is in. 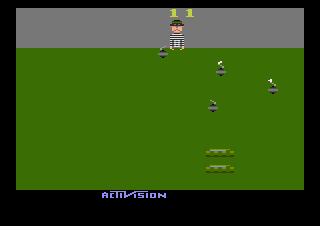 After the eighth wave the bombs all go that speed.

If you fail to catch a bomb all the bombs on the screen blow up and you lose one of your buckets. You get a new bucket every 1000 points, but there can only be three at any one time.