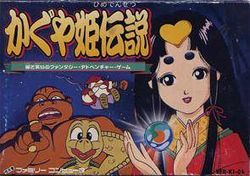 Kaguya Hime Densetsu (かぐや姫伝説, Kaguya Hime Densetsu? lit. Legend of Princess Kaguya) is a text-adventure game developed by Micronics for the Famicom and published in Japan by Victor Interactive Software towards the end of 1988. The game is very loosely based on The Tale of the Bamboo Cutter, an ancient Japanese folktale about a girl named Kaguya that is raised on Earth, only to eventually return to her true home, the moon, as its princess. It is actually the Famicom conversion of a game known as Shin Taketori Monogatari ("New Tale of the Bamboo-Cutter") which was released for several popular Japanese home computers, including the FM-7, Sharp X1, and several NEC PCs.

The game is a text and graphics adventure with minor side-scrolling arcade sequences. You take the role of a young woodsman armed with only a whip, a candle, and the words of a mysterious angel. A Moon Princess has landed upon Earth, and hides inside a glowing bamboo stalk within an enchanted forest. You must seek the hand of the Moon Princess who can only be saved by magical orb that is guarded by a fierce dragon. The game contains several surprise endings and three difficulty levels. Although it was never translated into English, a fan-made translation patch has been made available, and can be found here.