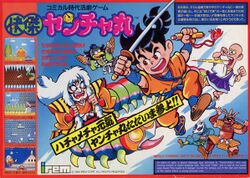 Kid Niki: Radical Ninja, known in Japan as Kaiketsu Yanchamaru (快傑ヤンチャ丸, Kaiketsu Yanchamaru? lit. "The Wonderful Yanchamaru"), is an arcade game developed and published by Irem in 1986, and was later published outside of Japan by Data East in 1987. The arcade game runs on Irem-62 Hardware, the same as Kung-Fu Master. The differences between the Kid Niki: Radical Ninja and Kaiketsu Yancha Maru are minimal. Aside from text translation, the most glaring difference is the main character's hair style. Kid Niki's hair is more "punk rock" with wild spikes and a ponytail in the back. Yancha Maru's hair has more subdued spikes and a topknot (or chonmage). In the arcade version of the game, the main character's keikogi is yellow while it is red in the home ports.

Kid Niki is armed with the Spinning Sword, which according to the game's manual, "has been passed down from generation to generation from the School of Chirin." In addition to the spinning sword, Kid Niki can gain extra offensive power by collecting Bells. The Golden Bell allows him to launch a projectile every time Kid Niki spins his sword, and the Silver Bell creates a spinning force field around him. Both of these power-ups last for a limited amount of time. The game is divided up into seven rounds, with a boss character at the end of each one.

In 1987, Data East released ports of the game for the NES, Commodore 64, and Apple II. Curiously, all home versions of the game show screen shots from the graphically superior arcade version on the back of their packages. Although it is an Irem game, the home ports were one of the more successful games released by Data East. In Japan, two sequels appeared for the Famicom. The first was Kaiketsu Yanchamaru 2: Karakuri Land in 1991, and the second was Kaiketsu Yanchamaru 3 in 1993. Each of the three NES/Famicom titles feature radically different character designs. There was also a Game Boy sequel called Ganso!! Yanchamaru in 1991. This portable sequel is a unique game and not a port of one of the existing Kid Niki/Yanchamaru titles. Kid Niki makes a cameo appearance in Irem's NES game, Kickle Cubicle.

One day in Feudal Japan, Kid Niki, the most radical of ninjas, is training at his Ninja School. Suddenly, a passing bird is struck down by an arrow and lands at Niki's feet. Attached is a note explaining that Niki's girlfriend, Princess Margo, has been kidnapped by the evil Stone Wizard. With the cry of "Will help you!" Niki bursts through the wall of his school and sets off on his quest to save Margo.