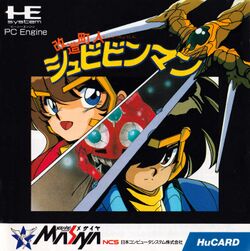 Kaizou Choujin Shubibinman is an action platformer that superficially resembles Mega Man; the protagonists are a boy and a girl in robot suits that pass through various stages filled with traps and hostile machine-like enemies. At the end of each stage is a boss, usually some sort of dragon, and after defeating it the player moves onto the next. The player can choose to head straight towards the last level on the overworld map, but it is usually in their best interest to take detours for additional items such as upgraded weapons, health extensions and health refills.

Though the game appears to be based on an anime or live-action tokusatsu TV show, it is in fact an original IP meant to evoke those media. It was followed by several sequels, the first of which - Kaizou Choujin Shubibinman 2 - was released in the US as Shockman. The original game along with its sequel were also released on Wii Shop, and later once more as part of PSN's Japan-only "PC Engine Classics" series.