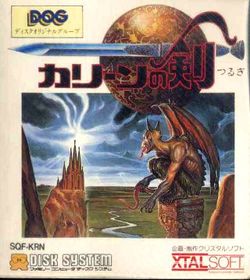 Kalin no Tsurugi (カリーンの剣, lit. Sword of Klain?) is an RPG for Nintendo's Famicom Disk System, developed by Square's DOG (Disk Original Group) in cooperation with Xtalsoft, and published by Square in 1987. It is a role playing game that borrows much of the presentation style and combat system of Hydlide, and mixes in a few concepts found in Ultima III: Exodus such as the blown up combat screens and the secret underworld.

In the game, you control a lone warrior who must wander across the world from village to village, picking up clues from townspeople and finding items vital to your quest. The world is large and expansive, but it does not scroll. You can only see particular portions of it at one time. Monster roam the world as well. When you cross paths with one, you are taken to a combat scene which shows a blown up depiction of the region you are fighting in. Combat is conducted solely by walking into monsters (a la Hydlide or Ys: Ancient Ys Vanished).

Since the game is a Disk System game, progress can be saved to disk, and loaded back again. However, the game boasted a Quick-Save feature, which allowed players to save the state of their game into system RAM for much fast recall by the game. Quick-Saves were only good for the lifetime of the system's power, so although writing to disk is slower, it is the only true way to save the game between plays. The game was never released outside of Japan, but a fan-translation of the game was released by KingMike in 2005. You can download a translation patch for the ROM here.

Monsters have appeared in the once peaceful land of Alitania, and the people have fallen into terror. The king's orders have fallen upon you, the bravest knight of Alitania.

"The fate of the country hangs by a thread. It may be possible to save the country with Gladrif's magic, but he is nowhere to be found. Therefore, I want you to search for him! Find Gladrif, defeat the monsters, and restore peace to this land once again!"