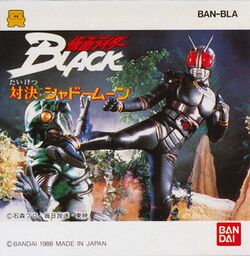 After being kidnapped by the cult Gorgom on the night of their 19th birthday, stepbrothers Kotaro Minami and Nobuhiko Akizuki were submitted to a cyborg surgery with the purpose of becoming the candidates for the next Gorgom Creation King. Both of them are called Century Kings and are destined to best each other in a final battle - whoever wins will become the next Creation King. Kotaro escaped before getting brainwashed (which is the final step in the surgery), with help from his foster father, and turned against Gorgom. He soon finds out the horrific truth from his stepfather: Gorgom originally killed his true parents and, since both Kotaro and Nobuhiko were born on the day of a solar eclipse, referred as "Black Sun" and "Shadow Moon". Kotaro, taking on the name of Kamen Rider Black, was determined to rescue his stepbrother from Gorgom while protecting Japan. However, later in the series, Nobuhiko emerged as Shadow Moon to fight Kotaro with the survivor becoming the next Creation King.

In the game, players take control of Kamen Rider Black, who must defeat numerous Gorgom mutants. There are five levels of four stages each. In the first four levels, players must complete three side scrolling stages with a boss at the end. In the fourth stage, the player must fight against a final level boss using a zoomed in perspective with larger sprites. The player gets to ride Battle Hopper motorcycle throughout the second and fourth levels. The fifth level is composed entirely of boss fights, first against three Evil Lords, and then against Shadow Moon. If the player loses against Shadow Moon, the bad ending is shown before the game ends.

The game itself is considered rather poor, and was very disappointing to fans of the series. The controls of the game are especially bad, requiring the player to press

for kicks. The player moves considerably slowly on foot. Pressing

results in a jump that either barely leaves the ground or flies to the top of the screen, and leaping forward can only be accomplished by pressing right late in the jump, while tapping

simultaneously causes the player to somersault. Stages have very little variety in terms of enemies. Few players can muster the patience it takes to play through this game.