Withdrawl starts with in introduction to Vaultbreaker, a specialist that will get you inside the vault and deposit boxes. When you reach Vaultbreaker, he will describe the plan, of which the important portion is to simply drop in gas in the ventilation, and worry about the heist becoming hot.

Just Looking for my Car[edit]

The first scene involves reaching the roof and gassing the ventilation. Climb over the wall, and approach the guard at the door of the parking lot, and knock him out with close combat. Enter and quickly knock out the other guard before he finishes the radio call. Climb the stairs, and there is one more security guard that requires close combat.

When you reach the roof, simply move forward and climb up.

The ventilation device is found to the right, and next to the window. Approach it, and insert the gas. You can now rappel down to the loading bay.

There are two security guards, one on each side of the truck, and can be quickly taken out. Enter the security room on the right-hand side, and find two more guards. It is not possible to avoid raising the alarm.

The vaultbreaker will try cracking open the door. There will be two guards behind a glass window. Once he opens the door, Lynch will be sent to the front to keep the hostages in check.

We need all the hostages[edit]

When vaultbreaker reaches the vault, he will try cracking open the locks. This process takes 2 minutes, and the security guards will approach from the top. They will throw tear gas grenades, which you will need to throw back in order to keep a clear view of what's going on. It takes two minutes for the vault to get cracked.

In the scene's intro cutscene, Kane checks a few vaults, but the money wasn't there. After a small argument, Vaultbreaker prepared to blast open all the safety deposit boxes. The police will make a push to reclaim the vault, using tear gas in addition to a frontal charge. After 40 seconds, vaultbreaker will announce that the charges are set - follow him to the first landing. Once the charges detonate, return to the vault, to confirm that the briefcase is missing.

Return to the ground level - there are a few police in the way. Exit to the right and meet up with Lynch.

Lynch is having a bit of trouble at the front, having already killed the hostages. It's now time to escape, and you need to clear the way for the driver. Killing enough police allows the driver to approach and lets you escape. 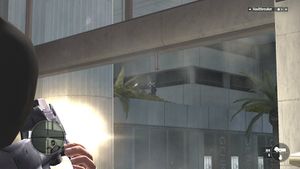 Of note, there are two snipers that are outside, on the buildings to the left and right. When they aim, you will see the crosshair camera at the bottom left corner, which you can use to help dodge their attacks. On the left, the sniper is places behind a few plants, and on the right, is near the corner of the building.

Once the van arrives, enter the back of the van.