Licensed to, and published by, Ariolasoft in the United Kingdom in 1986.

The original version designed and programmed by Jordan Mechner in 1984.

Converted for play on the Atari 8-bit computer systems by Robert Cook in 1985. Licensed to Atari and released in cartridge format as part of the XE Game System series (but playable on any Atari XE computer) in 1988.

Developed and published by Atari in 1987. Generally regarded as the worst conversion made. 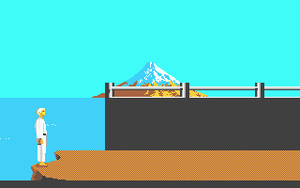 Converted for play on the ST by Andromeda Software and released in the United Kingdom in 1988. Potentially the best looking conversion.

Converted and published for the C64 in 1986. Released in both disk format and cassette tape format.

Licensed to and ported by Soft Pro in 1985. One of the earliest games developed by an American and ported to a Japanese system.

Converted and published for the MS-DOS operating system in 1986.