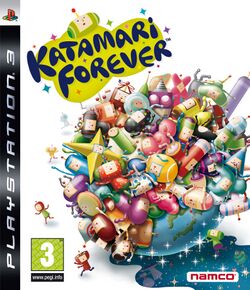 The game utilizes a full high-definition video format. In addition to graphics in the original style of Katamari Damacy, the game allows the players to select graphic filters such as cel-shaded, colored pencil or wood grain graphics. Katamari Forever is also said to include the feature of unlocking PlayStation Home Rewards through gameplay. Some of the items will include a t-shirt with a miniature Prince attached to the shoulder. Other cousins with other shirts will be unlockable for male and female avatars.

Katamari Forever contains a mix of 30 levels, with some being brand new and some being levels from previous titles in the series. Older levels take place within the mind of the King of All Cosmos, who gets knocked in the head and suffers from amnesia. The levels are black-and-white in appearance, and the objective is to roll up junk to bring color back to the stages. New stages take place in the present, where RoboKing, a giant robotic version of the King of All Cosmos created by the cousins, goes on a rampage and destroys all the stars in the sky. The objective of the new levels involves creating stars by rolling up junk as in previous Katamari Damacy games. New additions to the gameplay include: the "Prince Hop", which allows the Prince to jump into the air by flicking the controller up or pressing a shoulder button; and the "King Shock", which sucks nearby objects onto the katamari like a magnet.