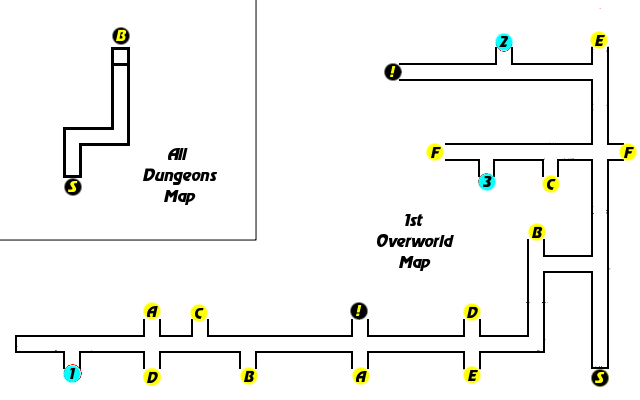 The map above illustrates the layout of the first overworld.

The map also illustrates the layout for the dungeons. Every dungeon is identical, both in layout and regular enemy occupation. The only thing that differs between any dungeon are the boss encounters at the end.

Note: The following walkthrough applies to every dungeon in this game.

The boss of stage 1 is known as a red Mametou, which is quite literally a bean head. He wanders back and forth in a semicircle along the top half of the screen. To fight this boss, Sayo can safely remain on the bottom half of the screen, and shoot up along the center. Every now and then, the boss will reach into his bowl and throw three groups of beans at Sayo. Move Sayo just enough to avoid getting hit by the thrown beans and resume firing up at the boss. Don't forget that the boss is highly vulnerable to attack when he first arrives in the room and before he begins to attack you, so get plenty of shots in before he starts to move.

If you defeat the red Mametou, you will rescue Daikokuten. Daikokuten is variously considered to be the god of wealth, or of the household, particularly the kitchen. He is recognized by his wide face, smile, and a flat hat. He is often portrayed holding a golden mallet called an Uchide Nokozuchi, otherwise known as a magic money mallet, and is seen seated on bales of rice.

You will then be transported to a magical cloud area where you can collect many stacks of Ofuda cards, but only if you can avoid falling through the invisible holes in the clouds. It is quite difficult to go very far without falling, although the path remains the same every time you visit this area. After you have fallen through the clouds, you will continue the game right outside the cave entrance. 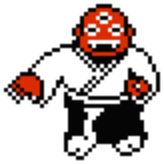 The boss of this dungeon is a three eyed prayer-bead monk. Instead of wearing his prayer beads like a good monk should, he throws them at you in groups of three much like the previous boss Mametou did. The only difference is that he does not follow any specific pattern of movement, but rather moves around the room somewhat haphazardly. That being said, he appears to become a lot more aggressive if Sayo ever stands to the left of him or directly above him, and will rush towards her much faster than if she is standing anywhere else. Other than this, your strategy against him should be the same as the last boss fight.

Note that if it is night time outside, you will perceive the dungeon interior as being nighttime as well. 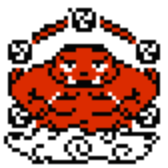 The boss of this dungeon is the Lightning King, Raidenou. He arrives on the screen floating on a thunder cloud. He has two different lightning attacks. From his left hand (on the right side of the screen), he can shoot a large lightning bolt which travels a short distance, strikes the ground, and starts a fire where it landed. The fire will remain on the screen for a while and must be avoided. From his right hand (left side), he shoots small lightning bolts, which travel all the way across the screen until they disappear. He will always perform both attacks together. Because the large lightning bolt has a short range, he generally tries to get close to you before attacking. However, he doesn't move very fast, and if you walk to the opposite side of the room from where he arrives, it's actually possible to fire very rapidly at him as he approaches you, and defeat him before he can reach you.

The wealth god that you rescue this time is Hotei. Like Daikokuten, he stands for wealth, but he is also the god of laughter and happiness by being content with what you have. He is depicted as a laughing fat man with a bag of rice over his shoulders and kids. He carries his few possessions in a cloth sack, being poor but content, and he is admired for his happiness, plenitude, and wisdom of contentment.

When you return from the Ofuda cloud bonus, head south to return to the main pathway, and begin walking to the west. Swat the Rumuru that attack you to increase your Ofuda by five for each one that you hit. You will pass a statue that you can wave your purification wand over for three more Onigiri if you need it. After three sets of Bake Chouchin, you will see an arrow facing left on the ground. Continue to the edge of the screen to reach the second overworld.