Sayo and Miki are two shrine maidens that get involved in an adventure to rescue the seven gods of fortune (along with an eighth god, the high god). They must run around areas of feudal Japan which have had space twisted and warped around by the evil demons who have kidnapped the gods. In a single player game (first title screen option), only Sayo is available. In a two player game (second title screen option), Miki is available to the second player when the first player passes control to Miki (by pressing

to pause the game and pressing

) or when Sayo loses her life. Miki has her own Ofuda, Onigiri, and Crystal count independent of Sayo.

Sayo and Miki have three forms of attack. They can wave the Gohei, a purification wand that bats away most of the smaller demons that confront her. They also have Ofuda talismans, which they can throw at the enemy. They only have a limited number of these cards, but they collect more by defeating certain enemies. Ofuda cards are also used as currency throughout the game, in order to purchase items, or access caves. The most Ofuda cards either player may carry is 999. One of the items they can purchase are crystal balls which may be used in a pinch to destroy every visible enemy. The most Crystals either player my carry is eight.

Both Sayo and Miki can sustain a certain number of hits before losing their life. The number of hits they can take is determined by the number of Onigiri, or rice balls, they have left. They may hold a maximum of 6 Onigiri. For each hit, they lose one Onigiri, and if the Onigiri reach zero, they will lose their life. When they are down to just one Onigiri, their walk speed will slow down slightly. When Sayo, or both Sayo and Miki lose their lives, the game is over. The player may then choose to Save, Continue, or Reset on the following screen. You have the ability to continue (third title screen option) from where you last saved the game. Saving the game in the middle of playing costs 10 Ofuda cards, and causes the game to return to the title screen. 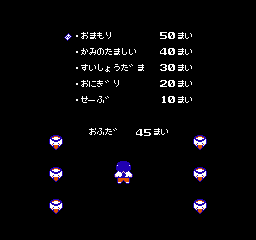 In order to enter a shop, you must find any of the huts scattered throughout the land, and shoot the head of the girl with the unusually long neck until she is defeated. At that time the doors will open and you may enter inside. Once there, you will be presented with a menu of options. Each option is a different price. Use

to highlight a different choice,

to purchase that choice (assuming you have enough Ofuda cards to purchase it), and

to leave the shop. The following is a list of items available from the shop: