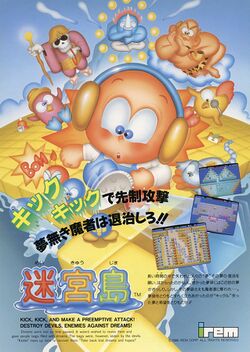 Kickle Cubicle, known in Japan as Meikyuu Jima (, Meikyuu Jima? lit. "Labyrinth Islands"), is a puzzle game developed by Irem for the arcades in 1988 and then ported to NES in 1990. Gameplay is somewhat similar to the Adventures of Lolo series as well as Pengo.

The player controls Kickle to solve a series of puzzles that take place on frozen islands. The goal of each level is to collect the red Dream Bags. There are several types of deadly enemies. Kickle can use his freezing breath ability to turn some enemies into ice to create walkways on water or to defeat other enemies. He can also create a pillar of ice in front of him to act as a block. The player must travel through the four lands in the Fantasy Kingdom, which Kickle plays in a set order. Each land has a boss at the end. After completing all four lands, the "special game" begins, consisting of 30 harder levels.

There are some noticeable differences between the Japanese Famicom version and other releases. The Japanese version tends to have more enemies present in the various levels. Additionally, the player can attempt the different islands in any order. In the North American and European releases, the island order is fixed.

The protagonist Kickle wakes up one day to find his homeland, the Fantasy Kingdom, turned to ice by the Wicked Wizard King. The King has imprisoned the people in Dream bags. Only Kickle was unaffected. Kickle sets out to save the kingdom with his special freezing breath, which he uses to turn the invaders into ice to use against his foes.