Angel Land is organized into four stages; the Underworld, the Overworld, the Skyworld, and the Palace in the Sky. Each of these first three stages are divided into four areas. If you defeat the Boss of the fortress in the last area, you will be able to clear the stage.

If you defeat all three of the fortress Bosses in Stages One through Three, you will be able to get the three most important items—the Mirror Shield, the Light Arrow and Pegasus Wings. With these items, you can go to the Palace in the Sky (Stage 4). If you can defeat the last boss Medusa, you will rescue Palutena and save Angel Land.

If you defeat an enemy character, it will change into a heart. It's important to enter the eight different types of rooms in order to collect items and recharge Pit's power. The stages in the Underworld and Skyworld scroll vertically, while the stages in the Overworld and the Palace in the Sky scroll horizontally. 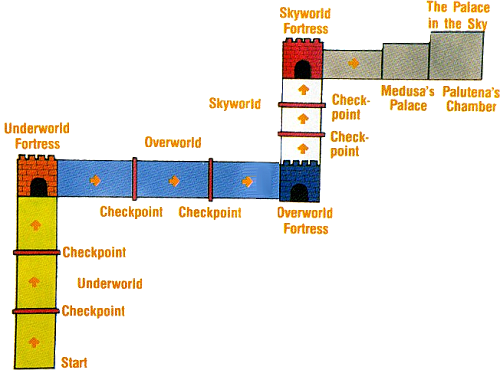