In this chapter, you are equipped with the Three Sacred Treasures. Essentially, this means your shots are powerful and have great homing, and you can fly for however long as is necessary. In future playthroughs, it is possible to use normal equipment, but the treasures are required the first time around.

You'll quickly be attacked by a bunch of enemies, but with the Three Sacred Treasures, they should not be too much of a problem. More concerning are the Trailtails, which create barriers as they move along. Kill the Trailtails to destroy their respective barriers. Immediately afterwards, you'll have to deal with Shootflies, which will swarm you if you used ranged attacks. However, you can still use melee attacks and dodging to deal with the other enemies, so don't let yourself be an easy target. Alternatively, feel free to open fire, so long as you make the Shootflies priority targets.

After the Shootflies, you'll enter a narrow tunnel and collect some Recovery Orbs. Along the way, you'll meet your old foes, the deadly Ornes. The good news is, the Three Sacred Treasures allow you to kill them, so open fire! Just remember that touching them still kills in one hit.

Once you enter the Underworld, you'll be swarmed by enemies. These will include Boogities. Unfortunately, the Arrows still aren't effective against their shields, meaning you'll have to fight them carefully. The good news is, Dark Pit will show up and damage the enemies. He's on your side now, and will take out an enemy or two. How nice. Soon, you'll see Medusa. She'll sick a miniboss on you: The Underworld Guardian.

The Underworld Guardian is essentially composed of a bunch of turrets atop a main body. Take out the turrets first before focusing your fire on its head. Occasionally, it will disappear, create a line across the screen, and attack along the line. Dodge those attacks by simply avoiding the area. Blast through the barriers it makes too, or they will corner you and do damage. Soon enough, Dark Pit will jump in and finish the Guardian off.

This Ground Section is composed of four separate sections, each of which is connected to a door. The first three can be done in any order, and end with a boss from earlier in the game. All three bosses should be easier by now, thanks to your experience and the power of the Three Sacred Treasures. Feel free to tackle them in any order you want, and heal at the hot spring after every part.

Just shoot whatever moves and keep on going. The only real threat should be the Reaper, but so long as you attack it from a distance and keep away, you should be fine. The real threat is the Clubberskull that appears in a narrow corridor. Shoot it and run simultaneously! Above all else, keep your distance, especially since your bow is primarily a ranged weapon. Use the nearby Lightning of Judgment to deal extra damage before you get cornered.

Up ahead, grab the treasure chest on the staircase to the right before going up, but watch out for the Orne zipping up and down. In the plaza halfway up, you'll see an Exo Tank. Drive it the rest of the way up the stairs and destroy every enemy with it. Even if you have trouble running them over or shooting them, it's safer to face enemies in the tank than out of it, especially the Clubberskull. When you're done, grab the Drink and prepare to face Twinbellows.

Honestly, Twinbellows should be a walk in the park, especially this second time around. Just strafe and dodge its attacks

Advance through the few token enemies until you find a new vehicle: the Aether Ring. Use it to quickly strafe enemies by shooting and running circles around them. Using the same strategy as you did against Twinbellows works well here for the mass you have to fight. Head into the well, and you'll see a treasure chest off in the distance. You can reach it using one of several mobility-related powers, but it isn't necessary. After you reach the jump pad, defeat the nearby enemies and collect the Drink before proceeding to the Hewdraw.

Once again, the Hewdraw fight should be somewhat easier than your original encounter with it. Your excellent ranged attacks in particular make this fight a snap. Just be sure to watch out for its projectiles, and you should be fine.

It's this place again! This time, the gimmick is switching the ceiling and the floor. Ultimately though, you can proceed through this part fairly linearly. Go through the yellow spikes ahead; they're an illusion. Defeat the enemies and go onto the glowing spot to switch to walking on the ceiling. Keep on defeating enemies and going to the next point until you reach another set of yellow spikes. Go through these, hit the switch on the other side, and then go back. Kill the Orne and carry on. The next room contains several platforms connected by jump pads, one of which has a treasure chest. They all link together, so feel free to grab the chest before going through the door. On the other side, there's food and a Cherubot. Eat up and get in before going on, because there's one more fight before going against Pandora again.

Since Pandora is a fairly recent boss, she might be a bit more trouble than the other two. Just be sure to once again keep your distance, melee her physical projectiles back at her, and run away when she charges.

Now that you've defeated all three minibosses, it's time to defeat Medusa! Go back through the doorway where you first appeared.

Yeah, I don't get it either.

The first room contains a few waves of enemies. One of them is sort of new: a Skuttler in a suit of armor. They're only vulnerable to being hit from behind, but this is balanced out by their slow movements and general weakness. Next up is a series of corridors, guarded by flames that appear and disappear. Don't touch those; they burn. Also, don't go left at first unless you're a completionist; it's a dead end with a lame treasure, a pair of Speed Boots that quickly wear off. The intersection to the right soon splits into two. To the right is a treasure guarded by an Orne, while to the left is yet another intersection. Going ahead leads to a Clubberskull, so go right.

The next couple of rooms are fairly simple, but then you enter one with four elevators. These will gradually bring in more enemies, so defeat the ones around as quickly as possible. These will include an Eggplant Wizard and a Clubberskull, so watch out! Next is series of grind rails. Be sure to shoot as many enemies as possible while riding them, and look ahead to make sure you're not going to end up anywhere bad. The last rail to the right in particular leads into a pit, causing significant damage. When you land, deal with the Boogities and move on.

This next part contains a new type of invisible path. Step on the switch to the left to highlight their edges. Falling off shouldn't be too much of a problem, so long as your careful. The next room contains a floating explosive. Detonate it immediately to destroy all nearby enemies. The room after that contains more invisible platforms, which you have to dash from one to another upon. At the break point, do not disturb the treasure chest; it's a minicutie in disguise. Just leap to the next platform and head along the hidden series of platforms to the left to progress. 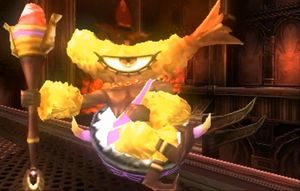 Behold, one of the game's greatest enemies.

When you land on the platform, another new enemy will appear: the Tempura Wizard. Its gimmick is shooting fireballs at the player to cook them and then chasing them down to kill them in one hit. You could either approach it the same way as an Eggplant Wizard, or simply dash past. There's no shame in running from a fight against this thing.

The final major room features platforms that appear after defeating enemies. this should be simple enough. Your last new enemy here will be the Erinus, which splits in half to divide and conquer. It really isn't that big a threat. The real threat here is the Orne circling around the platform. Keep your eye on it, so that you're not in its way when it sweeps across the platform, especially if you're doing this chapter without the three sacred treasures. Other than that, just expect to fight some familiar faces again before facing Medusa herself.

Medusa is a three part boss, each of which are based on the Air segments of the game. At first, Medusa throws Pit far back, turning the fight into an obstacle course. Blast the obstacles that can be destroyed, like rocks and purple shots, and weave through the ones that can't, like lasers and green shots. When you get close enough, Medusa will teleport away, making this a challenge of chasing after her while she shoots projectiles. One of her main attacks is to leave two purple shots floating near Pit, to prevent you from going to that part of the screen under the penalty of heavy damage. Constantly fire at her from a distance, dodge her attacks, and use your Special Attacks when floating near her.

The second part features a stationary Medusa with more firepower. She'll constantly spam projectiles similar to the ones she used earlier. Aiming should be easy, so focus all of your attention on dodging.

Finally, Medusa will decapitate herself and sic her head on you. As you two fly around, she'll shoot projectiles and beams at you, which you have to dodge while counterattacking. When weakened, she'll fly back to her body, and reattach to the head. Hit her eye to finish her off.

The credits then roll. Well, congratulations, you beat Kid Icarus: Uprising! I hope you had a good time and... wait. The game's not over. Not even close. You're barely a third of the way done!