This is essentially the tutorial level, so things should be fairly easy. As usual, you start with a Sin & Punishment-like flying section. Palutena will review the game's controls while the player is tasked with shooting down some waves of enemies, mostly Monoeyes and some Kerons. Get used to them, cause you'll be seeing them the whole game. Monoeye shots are not particularly fast, but have some homing ability, so be careful. It is difficult to die, so feel free to experiment with the controls, especially in the less intense portions. Medusa makes an appearance, but merely taunts the player before leaving. Halfway through the flight, you can collect health orbs to recover any lost health.

When in Flying sections, try to destroy as many enemies as possible. This will net you the most hearts, which can be used to buy new weapons. Wiping out an entire group of enemies grants even more hearts, so try not to leave a solitary enemy behind. 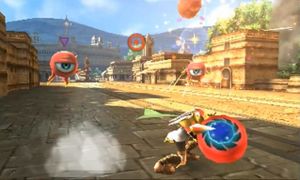 On the ground, be sure to collect the food down the alleyway before progressing. You'll encounter some snake-like Shemums. They'll be able to poison you, so try to pick them off from a distance. You'll also encounter more Monoeyes. Up ahead, there will be an intersection at a courtyard. To the left is a treasure chest, which can contain some useful goodies. To the right is a grenade, which can be used to destroy all weaker foes in an area, and a vase, which spawns Shemums. Melee the vase to stop them.

There will also be an Intensity Gate, which only opens at a difficulty of 5.0 or greater. If you're playing at that difficulty, it's worth the side trip to collect the treasure inside. However, one of the enemies inside the gate is a powerful Crawler, which can only be attacked from behind. Defeat the smaller enemies around it first, and then dash into position. When it's defeated, you're given a moment to run away from the imminent explosion. Be sure to collect both the treasure from the chest and food.

Before going up the stairs, grab the treasure sitting between the two flights. When going up, be sure to stay towards the side to avoid being hit by the boulder that rolls through. At the very top is a Drink of the Gods. This item restores all of your health, and usually indicates that a boss fight is ahead. Drink it by walking onto it and move on. 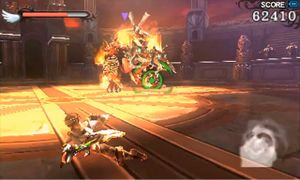 Despite its ferocious appearance, Twinbellows should not pose too much of a threat. The key to defeating this boss is shooting from a distance and dodging its speedy charges at the player. On higher difficulties, powers like Tirelessness and Brief Invincibility can help the player avoid being hit by attacks. Twinbellows can also shoot fire from its mouths, but this can be dodged, even at a close range. If anything, Twinbellows is the game's way of teaching the importance of evasion, especially in boss fights.