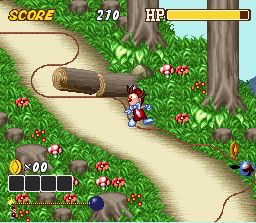 This stage takes place in a forest and is fairly straightforward. Avoid spikes, jump over gaps, grab every balloon you see. If you don't make it to the end in time, the bridge will be blown up and you can't cross the gap!

Somewhat near the end, you will see a cannon in the middle of your path. Jump on it carefully, because you can overshoot and get hit by a cannonball. The secret level will be a fairly conventional platform game, with moving platforms. Make it to the end of the secret level and your reward is a time power-up, which makes the fuse stay in place for a while. 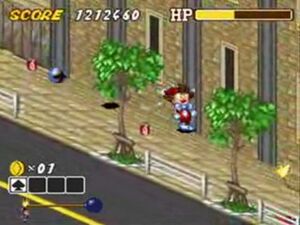 This level is in the city, and is a bit harder. One of the first things you will notice is fire hydrants have tricky timing. If you just walk past one, the cap will blow off and you'll get spritzed, taking some HP and slowing you down. You must jump just before you cross the hydrant's line of fire, or you'll get nailed. If you don't make it to the end on time, the bomb will cause part of the ground to sink enough to form an impassible pit!

You will find little springboards along the way. Hit the second and while running, hit the third. You'll fly way up in the air to the secret level. The rest of the currently known secret levels will be similar to this one, so pay attention. You fly up in the air, collecting coins and avoiding weights. If you get hit by a weight, you'll fall back to the ground. Make it to the end and you'll get a time power-up.

You will find two brick walls. You'll notice a soda can on the ground while you climb over the second wall. Fall on top of it, and you'll reach the secret level. This is exactly like the previous secret level, except you're falling down to the ground and avoiding spiked pits. At the end, you will get a jump power-up, which makes you jump continuously until it runs out. You may want to avoid them, but go to the level anyway for all the free coins. 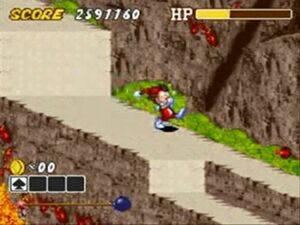 This lava level is tough. There are no known secret levels yet. If you don't make it to the end on time, the bomb's explosion will cause the two boulders to fall and obstruct your path. 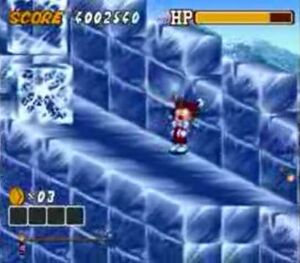 You'll slip and slide on this level, so it may be harder to grab balloons. Near the end, you will encounter Blackjack on some kind of vehicle. He'll move from side to side so stay on the side he isn't on. When he moves over to your side, jump over to the other side to avoid a blast of ice water.

Early in the level, you'll find a pit where three ice platforms rise and fall. Get past the first, and you will see a second after it, with a balloon in between. Just to be safe you may want to grab the balloon in case it has the spade card, but you can safely ignore it if you have the spade card already. Chances are this balloon will take you sky high and drop you. If you do this while running, it'll probably rocket you past the bonus level, so if you grab it, do so at a full stop. In either case, fall right into the pit after the balloon. You have to fall where the first of the three ice blocks are: too far and you'll just climb up the other side of the pit. At the end of the bonus level is the jump power-up. You almost certainly don't want it this time around. 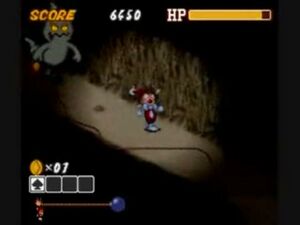 The last level! Near the very end, you will see what looks like a large, black blob. Jump on it! It's Blackjack trying to hide from you. If you don't trounce him, you almost certainly will not reach the bomb on time, in which case a portion of the cavern will collapse, blocking your path!

At one point the cave path gets extremely narrow. Fall into the first pit you see after this happens. At the end is a slip power-up, which makes the ground behave as though it were ice. You probably want to avoid it. 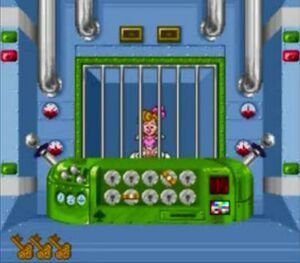 Princess Honey at the end of the game.

After the end of level 5 you'll have five keys -- and here's where you use them. Unfortunately, there are 10 keyholes. One of them will unlock the princess. Which one? Unfortunately, we don't know. If you don't find the right one, the princess is blown up and you get the "bad" ending. You'll also get a different "bad" ending if you didn't get all five hearts. If you did unlock the princess, though, you will get to try hard mode, which is insanely hard.

There are two bonus levels you may get to play at the end of a regular stage. The first one is a simple air hockey game. It is played like normal air hockey, where you try to knock the puck into your opponent's goal while defending your own goal. The other bonus game is a whack-a-mole like game where you try to bop Blackjack over the head as he pops up from different holes. Avoid hitting anyone else that may pop up. 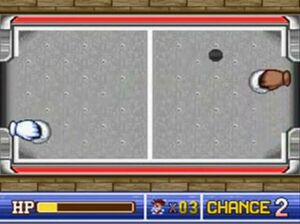 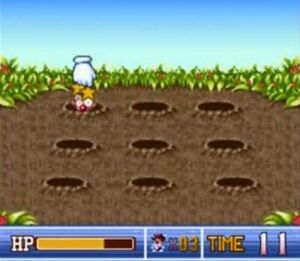