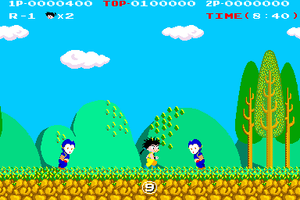 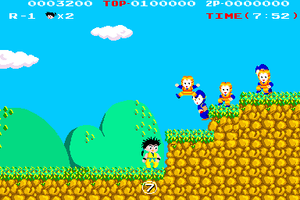 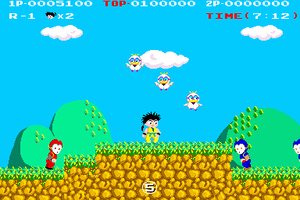 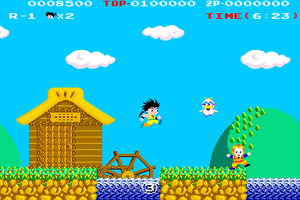 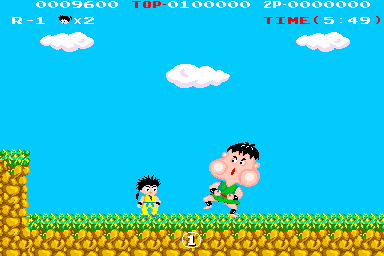 Death Breath is a man with a gigantic sized head. He has three methods of attacking you. One is by lowering his head in an attempt to ram you with it. Prepare to back away from him when he does this. The next attack does not actually harm you, but may put you in a bad position is his breath attack. He will inhale twice, before letting out a giant exhale which will push you a short distance away from him if you are standing too close. His final attack is to leap in the air and attempt to land on you. It is during this third attack that he is vulnerable to your attack. Be sure to swing your sword just as soon as his feet fall within range. He will bounce back, and your sword will be knocked loose from your hands. Retrieve your sword and prepare for the next chance to strike. Attempting to hit him during any other attack will merely result in your sword being flung from your hands. In the American version, you need only hit Death Breath three times, but in the Japanese version, you must hit him five times. 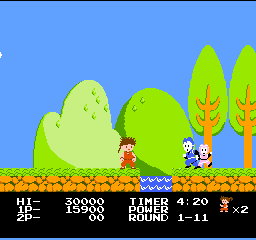 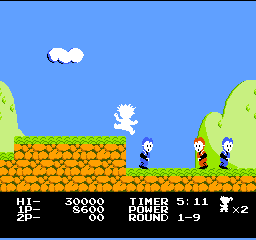 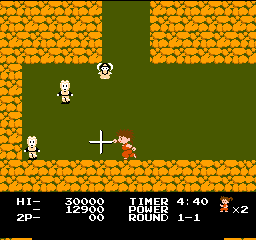 1-9: Jiggle the direction pad left and right while standing on the very edge of the hill shown to the left and spinning your sword. You will begin to flash and enter a secret area. In this area, a Striped fox clan member will walk back and forth, spinning off clones that bounce towards you. Every fifth one that you kill will provide you with a 300 point coin, or a 500 point scroll. After 20 clones bounce off, the main fox clan member will bounce away on his own. If you kill enough clones, eventually the princess doll will appear. Jump up to collect it, and your outfit will turn white, indicating that you can survive one hit. When you head to the right, and leave the area, you will continue on from 1-11 (forcing you to bypass the second bonus). 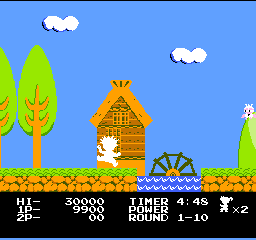 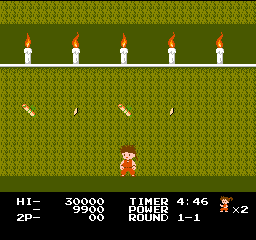 1-10: When you reach the water mill, jiggle the control pad left and right, and spin your sword. If you hit the right area, you will be transported to a room where four objects fall to the floor for a limited amount of time. They can be coins worth 300 points or scrolls worth 500 points. When time is up, the objects will stop falling and the screen will flash. Your only option is to exit the room to the left and resume the game.