There is no random chance in the first half of this level; all of the enemies you encounter will always appear in the same location and order. That being said, it is extremely important to remember how each of these enemies attack so that you can safely navigate your way through the cavern.

Cave of the Grote Green Grub[edit] 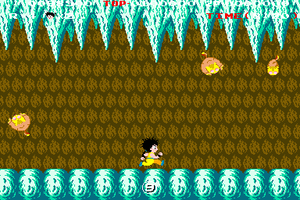 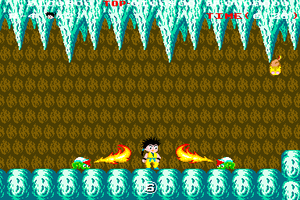 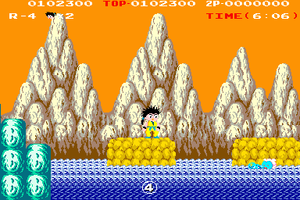 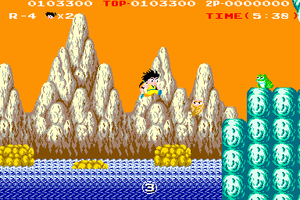 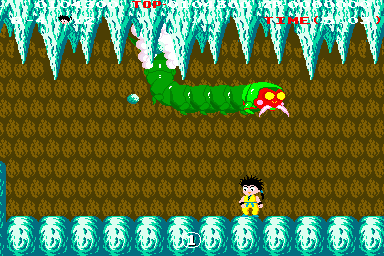 The Grote Green Grub is actually a very large burrowing insect that crawls in and out of the rock found among its den. It contains a head and six body segments. It will either appear through the floor or through the ceiling, with plumes of smoke and debris announcing it's arrival. In order to kill the boss, you must attack the head. But in order to attack the head, you must first remove all six of his body segments. Each one you attack will send your sword flying, so be prepared to pick it up. When the grub is down to just a head, a long skeleton, and a tail, then you can attack the head. Every time the head is struck, the insect goes into a scurry, looping around and quickly exiting the room through the floor or ceiling. Hit it three times and it will be destroyed. If you lose your sword and feel you are being chased by the grub, immediately head for the safest corner and wait. The grub will never trample you in the corner, and will return to the rock so you can retrieve your sword before the next appearance. 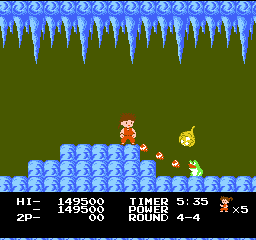 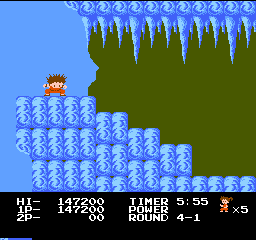 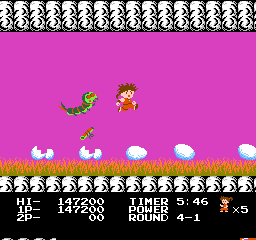 4-1: At the very beginning of the stage, walk to the left and squat for several second above the center rock in the ledge. You will be transported to a tunnel with a cache of eggs. Most (not all) of the eggs can be cracked open by jumping on them. A majority of the eggs you crack will contain baby worms that resemble the boss at the end of the stage. However, a few may contain 500 point scrolls, or even extra lives. Two gaps in the tunnel spew poisonous eggs. The first gap has a scroll floating over it, while the second one contains a princess doll. Collect the doll it endure one extra hit through the rest of the stage. The tunnel is long, encompassing seven segments, and when you climb up the ladder, you will be deposited at 4-8, bypassing the flying squirrels and frogs. 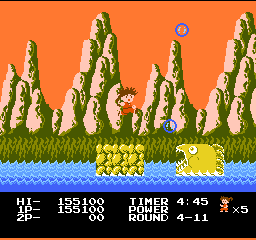 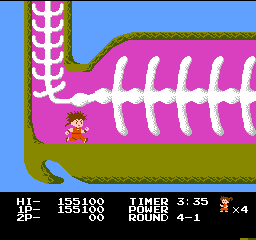 4-11: You will see two regular islands after a bobbing island. Stand on the right side of the first regular island, and jump straight up three times. On the third jump, the second island will turn into a fish. Simply fall into the space between the island and the fish to be transported to the belly of the fish. Walk to the right to reach the end of the fish and exit to return to 4-12. There are no items to collect, this is simply a "shortcut" that allows you to bypass the more difficult island jumping section.