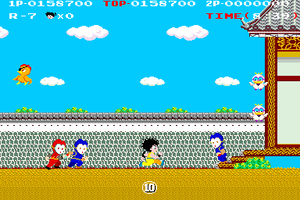 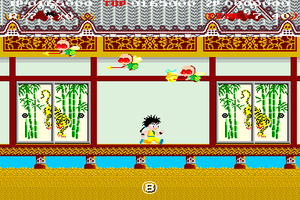 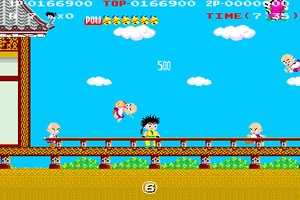 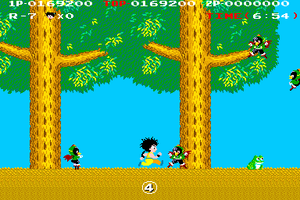 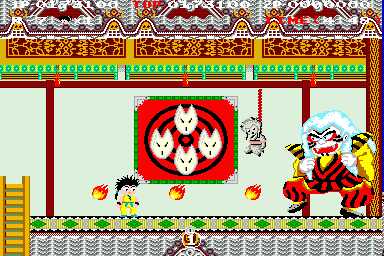 The Stone Wizard can actually be quite a difficult boss to beat. He will remain on the right side of the room, but he will spit forth three fireballs to the floor. These fireballs spread out across the room, and are difficult to avoid. Since it only takes one hit to kill you, this can be especially frustrating. To make matters worse, in order to hit the Wizard, you must be clear of the stone princess dangling from the rope. What's worse, you will also lose a life if you jump into the princess. Hitting the princess will only make your weapon reflect. Your best bet is to wait for the first few fireballs to hit the ground, and then rush in and strike the Wizard in the knee. It is far easier to avoid the fireballs when the Wizard spits them while jumping than when he remains standing. With some luck, you will be deflected backward and regain control before the Wizard spits more fireballs. Back away and slowly make your approach once more. If you hit the Wizard three times, he turns into a puff of smoke and escape through a hole behind the picture on the wall. The Wizard's stone spell over the princess will be broken and she will return to life. Now you must chase the Wizard and finish him off for good. 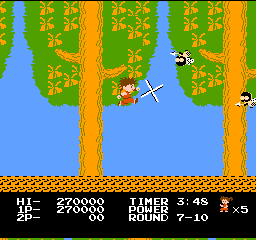 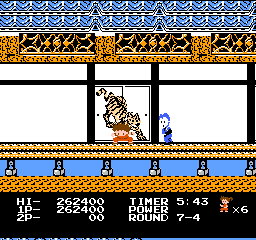 7-3 through 7-5: The first four doors containing tiger decorations on the panels can be used to access bonus rooms, but you can only access one of them (unless you die). To access them, simply squat down in front of the door of your choice for a few seconds, and you will be transported to the bonus room. When you are finished, you will be deposited in front of the fifth door at 7-6. Here are the descriptions of each room, in order from left to right.