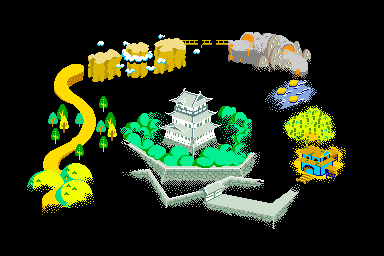 To complete Kid Niki, you must successfully pass through eight stages. Each stage contains 10 segments (14 on the NES) with a boss waiting for you in the final segment. In order to proceed to the next stage, you must defeat the boss. In the Japanese version of the arcade game, if you are defeated at any time, you are returned to the very beginning of the stage. In all other arcade versions, and on the home console version, you are returned to the latest checkpoint if you have passed one. You have a limited amount of time to complete each stage. If time runs out before you beat the boss, you lose one life. 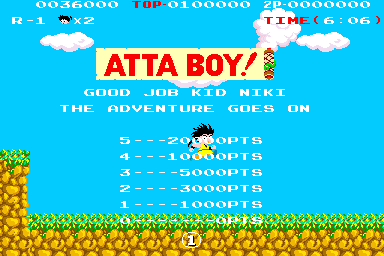 Whenever you defeat a boss, you are given a bonus based on how much time is remaining on the clock. Those players who can attack the most enemies within the shortest amount of time will achieve the highest scores. The bonuses are awarded as follows: 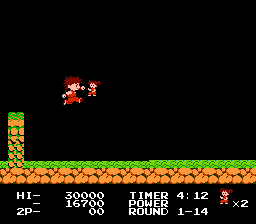 Despite the unsurprising drop in graphics quality, the NES and Famicom conversion of the game remains fairly faithful to the arcade original. Every stage contains the same major theme, and adheres roughly to the same arrangement of enemies and features. The stages are also a bit longer, containing 14 segments rather than 10.

Throughout the NES and Famicom versions of the game, there are secret entrances to bonus rooms and passages. These bonuses may serve as shortcuts, or places to get points, extra lives, and better defense, or both. Each hidden location is described in detail on their respective stage guide.

1-up trick: At the end of each level, after the scroll appears, you can strike it with your sword to make an item appear. Sometimes it will be a coin, and sometimes it may be a cloud. However, if you strike the scroll when the seconds portion of your Time Remaining is divisible by 12 (00, 12, 24, 36, or 48), the scroll will become an extra life.