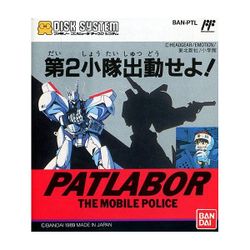 Patlabor is a portmanteau of "patrol" and "labor", with labor being the common name for technologically advanced mechanical walkers used by various construction companies to perform heavy-duty work that a human wouldn't be capable of achieving on their own. Because more and more of these labors are being hijacked by criminals, an equally powerful force of police-issued labors are commissioned and manned by members of the police force. The show follows Section 2 of the Mobile Police Patlabor division in particular.

The game is divided between side-scrolling platformer/run-and-gun levels and first-person shooter modes in which the player character, in their patlabor, must keep the peace by subduing criminals and other villains, some of which have their own labors.