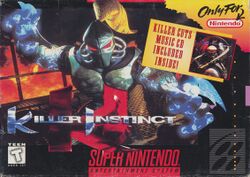 Killer Instinct is a fighting game developed by Rare and published by Midway and Nintendo. Initially released in arcades in 1994, and rumored to use an "Ultra 64" hardware engine, in reality the proprietary arcade hardware was co-developed by Rare and Midway. The game received a high profile launch on the Super Nintendo, as well as on the Game Boy. Its popularity led to a sequel, Killer Instinct 2.

In the game, Ultratech is a very powerful megacorporation (entities which, in this future setting, have replaced all governments) which organizes a tournament called Killer Instinct. Along with regular participants, experimental creatures created by Ultratech also fight in the tournament so their strength can be tested. Ultratech also discovered a technology to make bridges between dimensions, and releases from this dimensional prison a two-headed monster called Eyedol, an ancient warrior that was locked away along with his rival, Gargos, who would become the enemy in Killer Instinct's sequel.