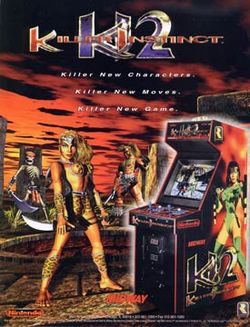 Killer Instinct 2 (commonly abbreviated KI2) is a 1996 arcade-only fighting game developed by Rare, licensed by Nintendo, and manufactured by Midway. KI2 is the sequel to Killer Instinct, an arcade game which was also ported to the SNES. Like its predecessor, the game features two 8-way joysticks with six buttons each for attacks (three punch and three kick), allowing for both a single player mode or a two player versus mode. A modified version of KI2 appeared on the Nintendo 64 as Killer Instinct Gold on November 25, 1996.

The plot follows where the previous installment ended. Eyedol's death at the hands of Orchid accidentally sets off a time warp, transporting some of the combatants back in time and allowing the Demon Lord Gargos to escape from Limbo. Now, trapped 2000 years in the past, the warriors that survived Killer Instinct, along with several new faces, fight for the right to face Gargos in combat, but Chief Thunder, Cinder and Riptor did not return. Each character that survived the journey from the first game has a corresponding background story, while new characters on this installment are native inhabitants of this past time period. Some fighters, like T.J. Combo who survives from the original, just want to get home. Others, like new character Tusk, want to bring an end to Gargos and his reign of evil. This time there is no tournament or prize money, just a fight to the finish with the fate of the future hanging in the balance.